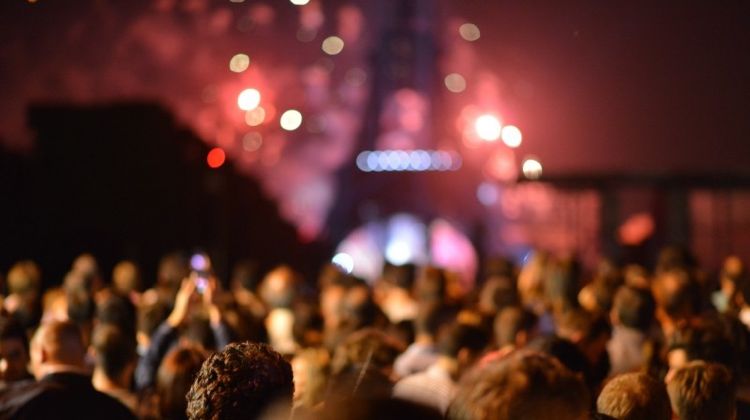 Here’s a crazy idea for you. Come celebrate New Year’s in Paris, now.

Take a dinner cruise on the River Seine …

Dance, sing and share the traditional “Bonne année!” kisses and hugs with us on the Champs Elysées.

Wherever you are in the world, surprise yourself.

It’s not too late. After all, “Paris is always a good idea” for New Year’s celebrations.

The great news is, Paris stays in holiday mode for longer than other world cities.

Start with New Year’s Eve in Paris. We call it Le Réveillon (from the French verb, “to wake”). We also call it La Saint-Sylvestre (after the saint who’s feast day falls on the 31st of December).

Wake up in Paris on New Year’s Day (our Jour de l’an) and feast on a divine meal at one of Paris’ top restaurants.

And cut into the traditional Galette de Rois on the 6th (The Epiphany).

The Galette de Rois is a frangipane tart made with pastry, butter, ground almonds and, for the best results, great skill. The best are made by Master French bakers like Frédéric Lalos. Pick one up at Lalos Paris, 22 Rue des Belles Feuilles, 75016 Paris.

In fact, stay on through January. The spirit of the new year lingers. You’ll here the French greeting all with “Bonne année” right up to the end of the month.

Plus, January is the beginning of Sales Season in Paris. It’s the perfect time to go shopping in Paris.

All it takes to celebrate New Year’s in Paris is a festive cheer & spontaneity.

Be spontaneous. Come join us and shout out “Bonne année!” with us. It’s simple.

No need for any great planning. All you need is a few days, a festive spirit, and a healthy dose of spontaneity.

If you’re in London, jump on the Eurostar. In a little over 2 hours, you’ll be in Paris. Twenty minutes later, you could be sipping Champagne and devouring oysters in Saint-Germain-des-Près.

Imagine the look on your wife’s face when you tell her, “Pack your bags, we’re going to Paris. Tomorrow night, we’re dining at Jules Verne on the Eiffel Tower!”

Isn’t spontaneity the spice of life?

Go on. Do something crazy for New Year’s celebrations this year.

Get on a plane. Jump on a train. Come celebrate with us.

And when you get here, take your pick from this list of the best things to do in Paris this New Year’s season.

Saint-Germain-des-Près attracts a lot of travelers, too. Go for the famous literary cafés, brasseries and restaurants. Explore the beautiful architecture, cobbled streets and winding passageways.

Best of all, Saint-Germain-des-Près has some of Paris most famous and historical cafés. Perfect for a hot chocolate, coffee or aperitif is the Café de Flores, Les Deux Magots, or the Brasseries Lipp. You can also opt to eat a full meal there.

And there’ll be plenty of opportunity to taste classic French New Year’s delicacies. Get your fill of oysters, foie gras, smoked salmon with great French wines and Champagnes.

The bistros, brasseries and restaurants in Saint-Germain-des-Près offer a great choice. Try Freddy’s at 54, rue de Seine, or Joséphine  at 117, rue de Cherche-Midi.  Le Comptoir at 9, carrefour de l’Odéon is a regular top pick, too.

And also try the roasted chestnuts from sidewalk vendors. Other seasonal treats to look out for include cider and spicy hot wine. All part of the season’s traditions in Paris!

The high-end patisseries in Saint-Germain-des-Près are also a must. Why not visit the best with a French gourmet food specialist from Paris?

For New Year’s Eve, take in a show, cabaret or ballet

Parisians celebrate New Year’s Eve late. So you won’t miss a thing by starting your evening indoors at the theater. Here are just a few ideas.

This is a popular musical in Paris right now. It’s complete with English language surtitles, so you’ll not miss a thing.

Something more French! This musical follows the story of D’Artagnan, the young and arduous Gascon fighter.

D’Artagnan comes to Paris to join the guard of King Louis XIII. Gascon first crosses swords with the King’s Muskateers (Athos, Porthos and Aramis). Then he joins them in their adventures to protect the Kingdom.

In Paris, you’ll visit the Cathedral of Notre Dame. You might even climb the stairs to visit the bell towers. So why not complete the experience by seeing this musical. 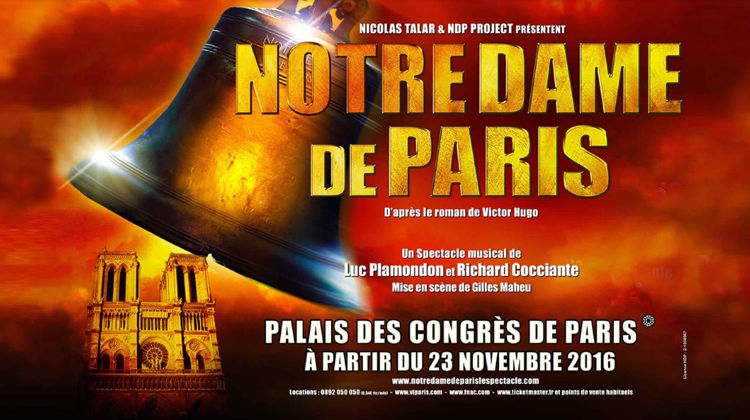 See the legendary work of Tchaikovsky, choreographed by Rudolph Nureyev at the Opéra Bastille.

Now this is the perfect pick for anyone who’s looking for a real Parisian party.

The Moulin Rouge is a slice of history and enormous fun. Enjoy a full meal with wine and champagne while you watch the spectacle.

Like the Moulin Rouge, The Lido is a classic of the Parisian cabaret scene.

Revel in the glittering atmosphere and gastronomic meal served with wine and champagne. As you dine, violinists will play amongst the dining tables. Then the the full show begins, taking you on an enchanted journey into the heart of Paris.

Imagine a classical concert in one of Paris’ historical churches on New Year’s Eve! Well, there’s plenty of opportunity to do just that.

There’s a long list of classical concerts on this New Year’s in Paris. Attend one at La Sainte Chapelle on the Ile-de-la-cité. There are also performance at Saint-Ephrem or at Saint-Germain-des-Près churches on the Left Bank.

Now this is my favorite option.

Let a master chef treat you to a special New Year’s menu, complete with wine and Champagne. See in the New Year in sumptuous surrounds with great company. A true Parisian experience!

New Year’s Eve is a big night for top restaurants in Paris. Getting a reservation can be tough but not impossible. Of course, prices are going to be higher than at other times of the year. But it is a special occasion and Paris is the perfect place to experience the art of fine dining. New Year’s is the best time to go all out.

The 3 Michelin Star Le Cinq at the stunning George V is a perfect choice.

Chef Christian Le Squer will treat you to a remarkable evening of fine dining.

There’ll even be a Ray Ventura-style jazz orchestra playing throughout the evening.

If the 1200€ menu scares the daylights out of you, there are other options.

Our regular top pick is L’Arôme in Paris’ 8th arrondissement.

The 295€ price tag is more affordable, for sure. And it will also delight. L’Arôme is a Michelin Star restaurant with a great reputation with local Parisians.

There are also many other options, of course. Check out this detailed post on fine dining in Paris for New Year’s

There are also less formal dining experiences to be had at some of Paris’ best brasseries.

In Montparnasse, you have the classic choices.

At La Coupole there’s plenty of atmosphere. The surrounds are stunning. This is where Josephine Baker, Picasso and Hemingway spent many nights in revelry. It’s a little quieter today, but still throws on a great party. You’ll love this art deco masterpiece. It’s perhaps Paris’ most famous brasserie.

Reserve your table at La Coupole

And just across the boulevard, there’s also Le Select. This brasseries also has a long and distinguished history. Like La Coupole, this was a favorite haunt for some of the 20th centuries big names in art and literature. Henry Miller, Hemingway, Cocteau, and Matisse all spent hours and days there. Today, it still attracts a warm and creative crowd. It’s popular with many celebrities, artists and writers.

Reserve your table at Le Select

Stay warm while taking in Paris’ architectural marvels. Dine along the River Seine during an evening dinner river cruise. It’s the perfect holiday season choice. The views will be spectacular.

Bateaux Parisiens is a popular choice. Boarding at 7h30, spend 5 hours cruising and dining on the Seine River. Included in the fee is a 6-course meal, including wine and Champagne.

The views are excellent for all tables. Large glass walls give almost 360° viewing. Several options are available at varying price ranges. Check out the details for Seine River cruises with Bateaux Parisiens by clicking here

A more costly option is the dinner cruise offered by Yachts de Paris. Despite the higher price though, it’s well worth the indulgence. See the full details by clicking by clicking here

Dance the New Year in at a top Paris nightclub

Paris a great place to party in fabulous nightclubs any time of the year. But New Year’s takes the Paris nightclubbing scene to a whole new level.

Dance in the New Year at one of Paris’ delux clubs. There’s no shortage of choice.

On the Champs-Elysées, there’s Queen at 22 Rue Quentin-Bauchart, 75008 Paris.

For more dates and bookings at Le Queen

In Avenue Montaigne, the Maison Blanche’s is a chic option.

The rooftop restaurant offers great dining and stunning views. And when you’re done, move on to the club to dance in the New Year.

For reservations at Maison Blanche

New Year’s in France is by tradition a time for private parties and time with family. But that doesn’t explain why the streets of Paris brim full with revelers, too.

In the later hours of the evening, usually after 9pm, the streets begin to fill with party goers. Here are two of the most popular New Year’s Eve destinations.

This iconic avenue is famous the world over. And it’s a top destination for party-going Parisians on New Year’s Eve.

There’s an amazing festive atmosphere. The Christmas lights and decorations set the scene. L’Etoile and the Arc de Triomphe are at the center of attention.

This year there will be a special video show projected onto the Arc de Triomphe from 11:30pm.

The Champs Elysées closes for all but foot traffic and alcohol is (in theory) banned from the streets. For that, you’ll have to go indoors. There are plenty of bars, brasseries and bistros along the avenue and surrounds for that.

Climb the 270 steps from Square Louis Michel or take the funicular ride. From atop and in front of the cathedral, you’ll get a magnificent panoramic view of Paris. It’s a wonderful spot to spend time during New Year’s Eve.

The mood there is more relaxed and less frenetic than the Champs Elysées. It’s a more village-like atmosphere.

Head around the back of the Basilica into the narrow streets and to the Place du Tertre. You’ll discover lots of little bars and restaurants where you can have a drink with crepes. Full menus will also be available. It’s far more touristy than other areas of Paris but great fun.

There’s always a large gathering around the Eiffel Tower, of course. But the crowd tends to be more touristy than other parts of Paris. It’s not a main attraction of Parisians but fun all the same.

Watch the tower light up in full sparkles at midnight. The best vantage point in my view is always across the river from Trocadero. Finding a spot to squeeze in there might be tough but well worth the effort.

What ever you do, don’t expect to hail down a taxi on New Year’s Eve (unless you’re prone to miracle working).

The public transport system will be working all night. It’ll also be free, so take advantage. The Metro will get you just about anywhere you want to go in Paris on New Year’s Eve.

Even opt for walking. That way you’ll discover those hidden away spots where local Parisians are partying. You never know, you might get invited into one of those “private” parties. Or you might find yourself slipping into a fun little local bar or club.

Oh, and expect a few firecrackers to go off in the streets. They’re available for sale in France and a regular part of the festivities.

What a perfect “crazy” idea.