Paris walks are often best taken randomly, the local way. We love taking on the flâneur’s attitude when stepping out for Paris walks.

But sometimes, of course, it’s nice to follow a walking tour itinerary. It helps you see the classic “must see” things in Paris.

So here you are …

This post shares one of our favorite Paris walking itineraries. It takes you from the Ile-de-la-Cité through Saint Germain to Jardins du Luxembourg.

Kickstart your Paris walk at Notre Dame Cathedral. It’s right in the center of Paris, on the delightful Ile-de-la-Cité.

Getting there is easy, especially if you’re staying nearby in a luxurious Paris holiday apartment. 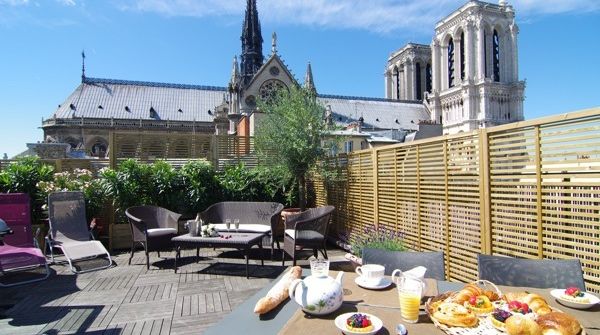 From anywhere in Paris, take the Metro. Connect to Line 4 and get off at Metro station Cité.

From street level, you’re not far from the Cathedral. You’ll have no trouble spotting it. 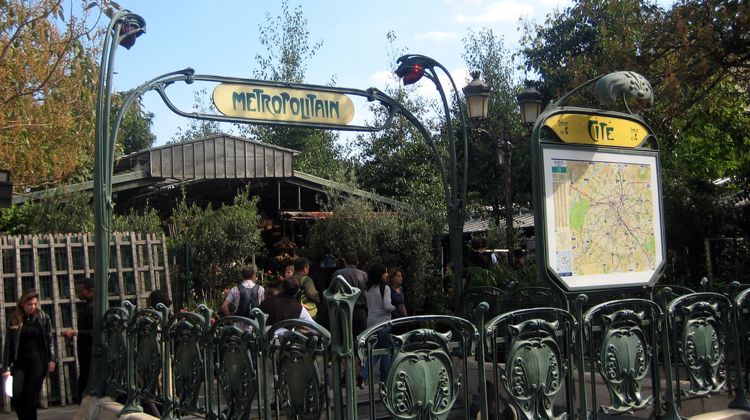 Now, we recommend starting this self-guided walking tour of Paris nice and early. You’ll avoid the crowds that gather at Notre Dame later in the day. 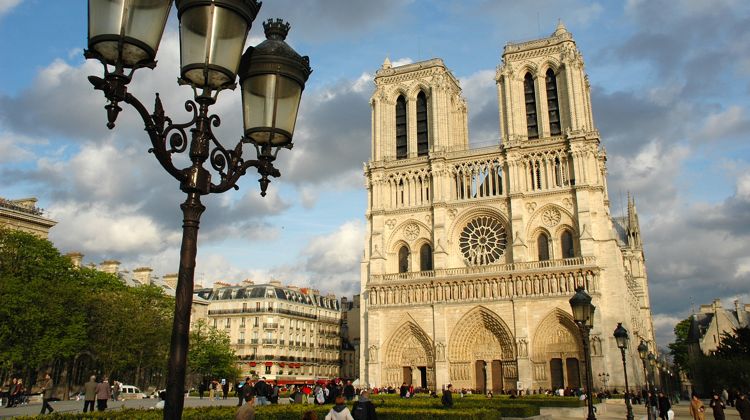 Notre Dame is the heart of Paris. It’s also at the center of France. Distances from Paris to every part of metropolitan France are measured from the place du Parvis, Notre Dame. A bronze star marks the exact location of Le point zéro des routes de France. Look for it on the ground, across from the Cathedral’s main entrance. 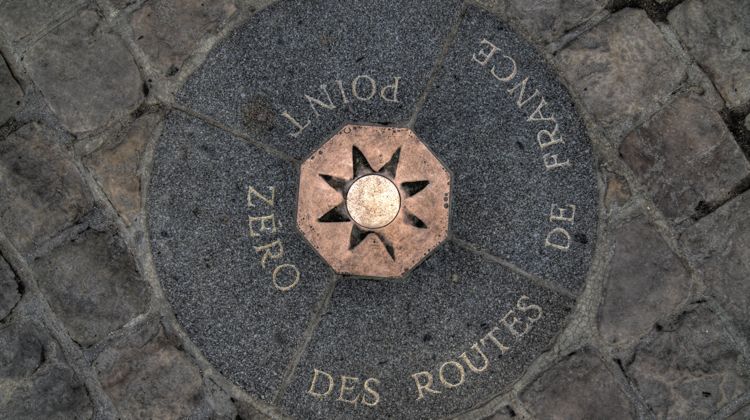 Notre Dame Cathedral is a masterpiece of French Gothic architecture. You’ll want to give yourself plenty of time to stroll through its interior. Circumnavigate its exterior, too.

Inside, take a seat. Soak up the atmosphere. Look up. Imagine the various “goings on” over it’s long history.

It took over 300 years to build. Begun in 1163, the Cathedral was largely completed by the 14th century.

What’s most remarkable is the sublime balance of design. Its ornateness is incredible. The flying buttresses encircling the chancel and supporting the walls and roof are an engineering and aesthetic marvels. 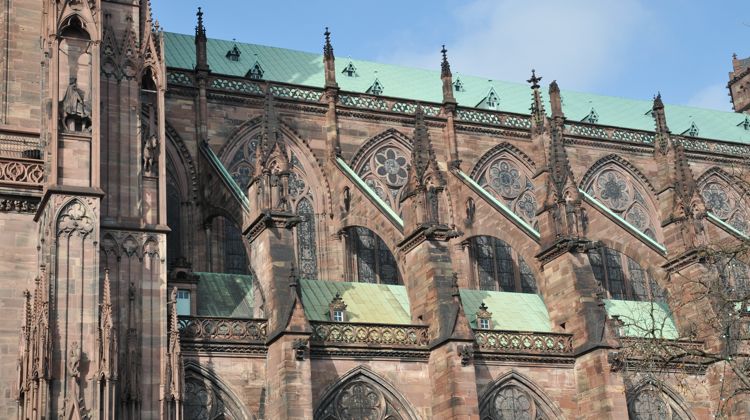 Don’t miss the three spectacular rose windows. And climb the bell towers and visit the roof. Take the 400-odd spiral steps up the spiraling staircase. See the gargoyles. Look out over the stunning view of Paris’ skyline. 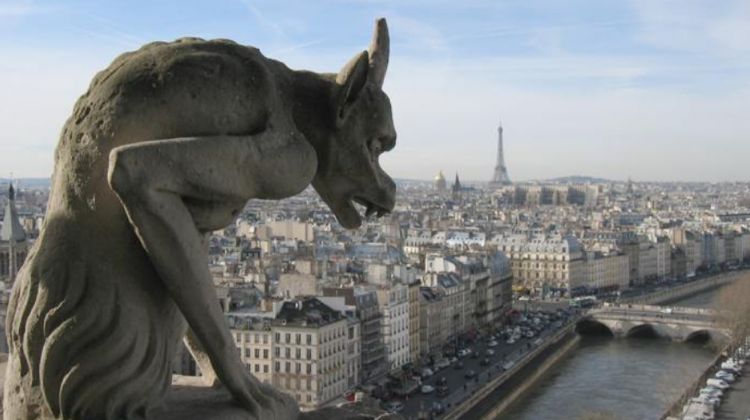 Also take the time to visit the Trésor (the Treasury). You’ll find it at the southeastern transept.

In the Trésor you’ll see magnificent artworks, liturgical objects and relics. The Sainte-Couronne is part of the collection. 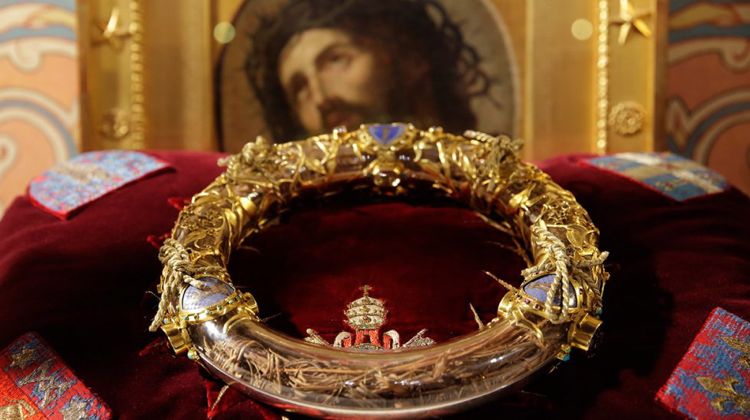 This “Holy Crown” is purportedly the wreath of thorns placed on the head of Jesus before he was crucified.

Continue your Paris walk across the Pont du Double

It’ll probably be hard to pull yourself away from Notre Dame. But when you do, cross the river Seine via the Pont du Double.

With your back to the main entrance of the Cathedral, you’ll find the bridge by turning left. It’s just a few meters away.

The Pont du Double connects the Ile-de-la-Cité with the Left Bank of Paris the 4th and 5th arrondissements). 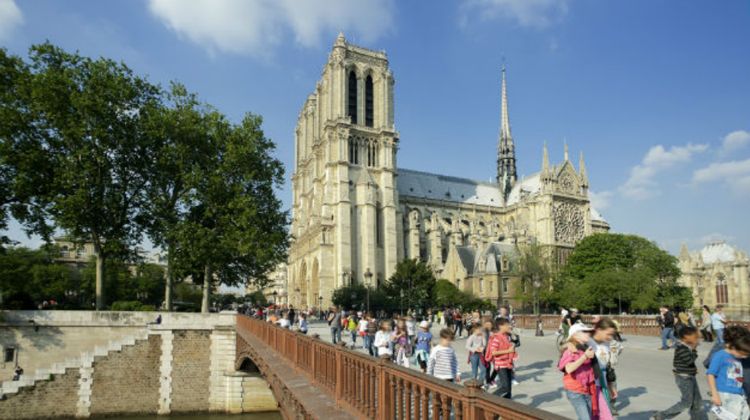 Construction of the original bridge began in 1626 and was finished in 1634. It was built to carry patients from the Left Bank to the Hôtel-Dieu Hospital on the Ile-de-la-Cité.

The name of the bridge derives from the toll amount charged for crossing the span. It amounted to a “double” denier. The replacement bridge you’ll cross (a one arch cast-iron bridge) dates from 1883.

Later in the day, this is a lively spot. Local rollerbladers like to gather here. They provide a free show of their skills.

At the end of the bridge, it’s worth looking back. The perspectives from here are fabulous.

Soon you’ll be heading right along the Quai de Montebello. But first, a quick detour. 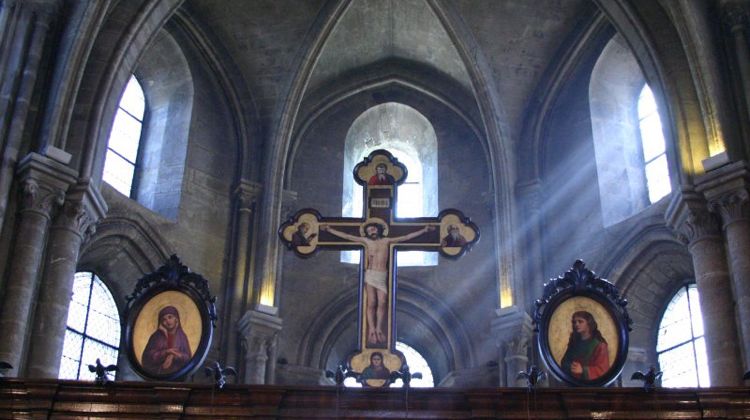 Today, the church is nearly hidden behind the adjacent Square René Viviani. Push the gate open and visit this delightful little garden. There are a number of modern sculptures and acacia trees over 400 years old. 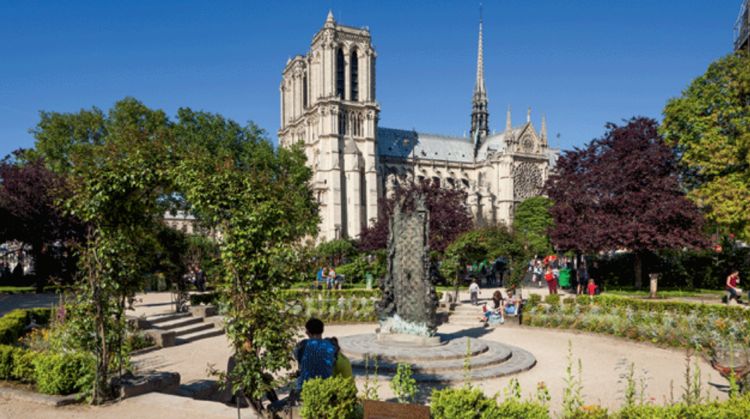 Then it’s time to continue on your Paris walk of the Left Bank. Return to the Quai de Montebello. Head to N°37 rue de la Bûcherie. This is the location of Paris’ famous English language bookstore, Shakespeare & Co.

Go inside. It’s delightful. Pick out a novel or volume of poetry. Or simply soak up the atmosphere. 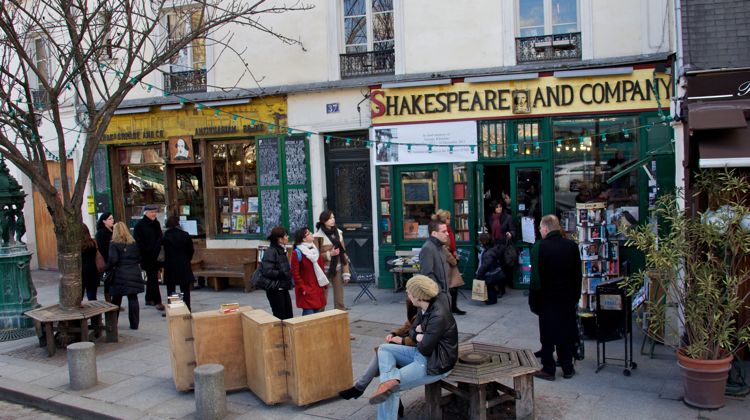 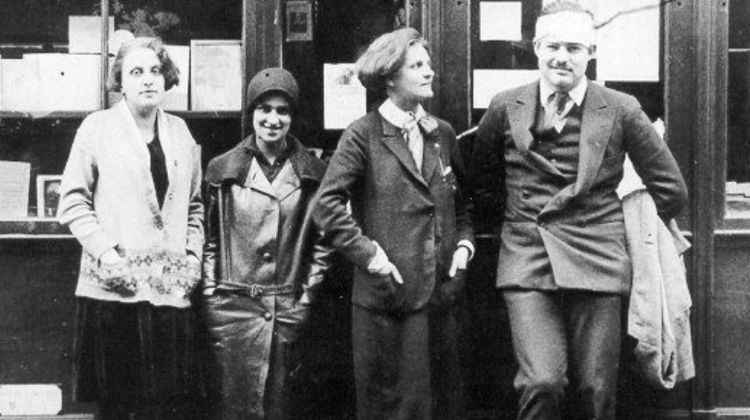 Sylvia Beach’s bookstore was famous in the pre-war era. It was the place many then-aspiring writers regularly visited for reading material. Among them were Ezra Pound, Ernest Hemingway, Djuna Barnes, James Joyce and Ford Maddox Ford.

From the Quai de Montebello to Place Saint Michel

At the end of the Quai de Montebello you’ll come to Place Saint Michel. Parisians of all ages have always gathered here.

In the past, Saint Michel has born witness to tumultuous historical events.

In August 1944, the French resistance battled German soldiers to take back control of the city. 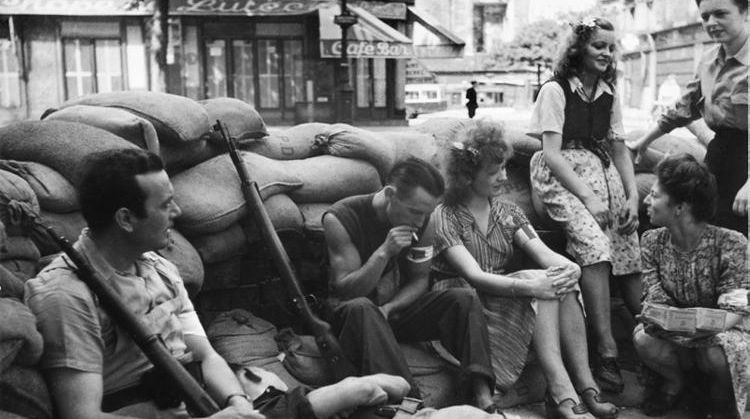 In May 1968, students occupied the area. They held bloody demonstrations in support of French Labor unions. 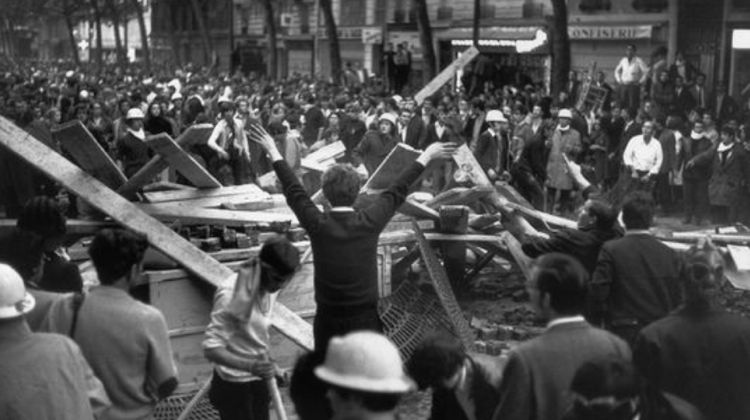 Today, it’s a regular meeting spot for friends. They gather in front of the Fontain Saint Michel. 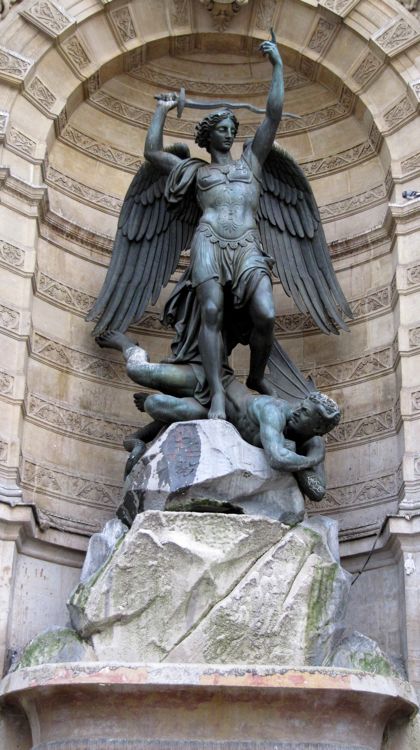 Commissioned by Haussemann under Napoleon III, construction taking place between 1858 and 1860, during the French Second Empire.

Along this quai you’ll get great views of the River Seine and the Ile-de-la-Cité. Note the booksellers lining the footpaths. Today, many of them tend to sell more “touristy” souvenirs than books. But some are still providing Parisian bookworms with much sort after editions.

On your way, you’ll pass by a little bistro called, Le bistro des Augustins at N°39. Stop for a coffee or tea. If you’re feeling hungry, it’s great for a lite meal, too. 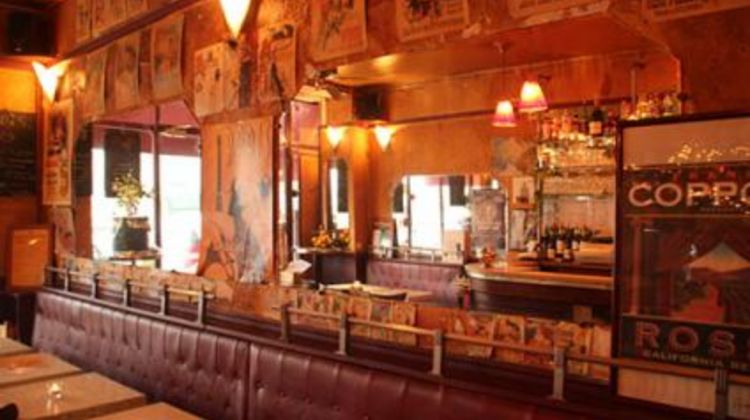 This is a classic little bistro, very popular with the locals. You’ll often see les bouquinistes (street booksellers from along the Seine River) dropping in here for refreshments and conversation.

Continue on to rue des Grands Augustins. It turns off to your left, away from the river Seine. 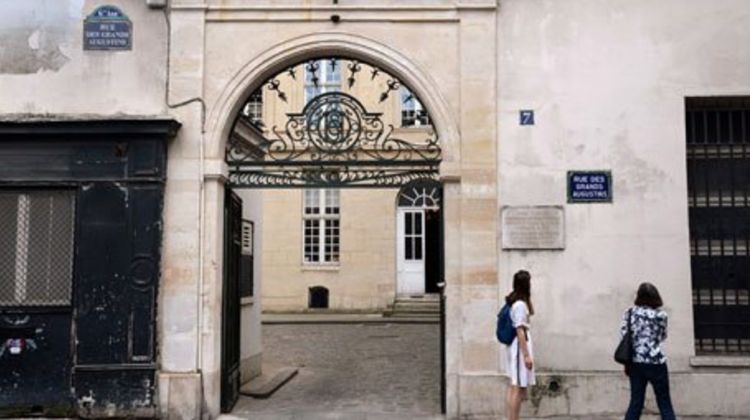 It’s one of the grand mansions for which the French capital is famous. But that’s not what it’s most famous for, today.

Look up on the wall. You’ll see a plaque. It announces that Pablo Picasso lived and painted there between 1936 and 1955. 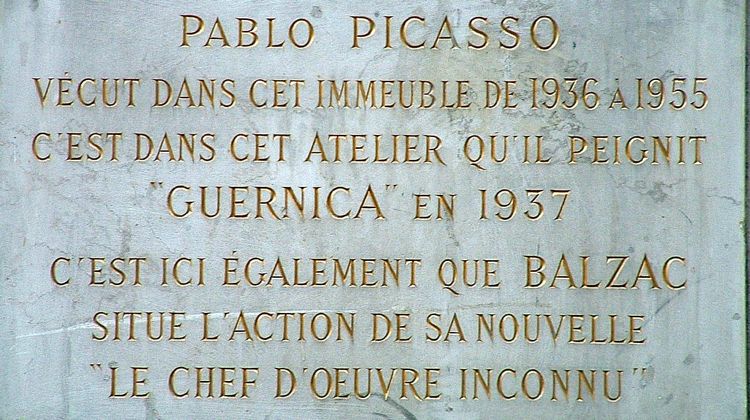 It was here, in 1937, that Picasso painted the now famous “Guernica”. He created the work, like many others, in the attic studio. The mural-sized oil painting on canvas is now regarded by art critics the world over as one of the most moving and powerful anti-war paintings in history. 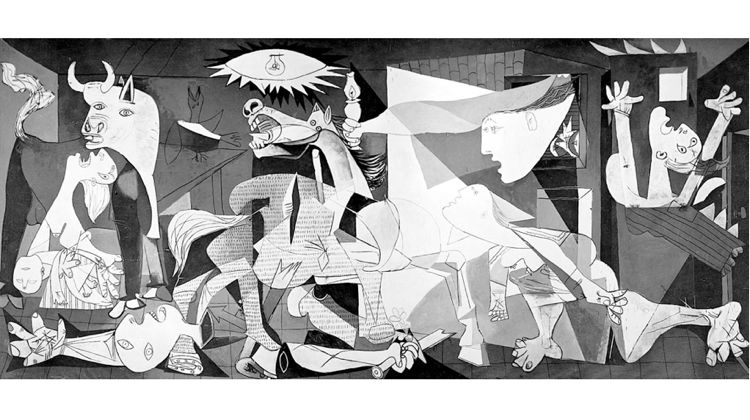 The painting depicts the suffering of people wrenched by violence and chaos during the bombing of Guernica, a Basque village, during the Spanish Civil War.

At this address, Picasso sat out the Nazi occupation of Paris. He suffered alternating harassment and wooing of the German occupiers. Famously, when one German officer tried to bribe Picasso with extra coal to heat his studio, he reportedly refused, saying: “A Spaniard is never cold!”

There’s no guarantee of entry here. But you can try wandering up into the building. If you’re lucky, you might make it into the attic. 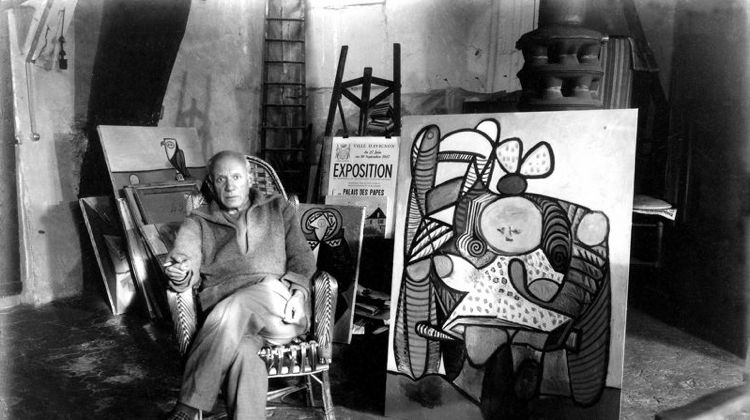 Today, one of the ceiling beams still bears the hook Picasso liked to claim Henry IVs killer, Ravaillic, was hung and tortured on. Inside, too, you’ll see on display a French flag Ernest Hemingway presented to Picasso on the day Paris was liberated in 1944.

Into the heart of Saint-Germain-des-Prés

Then on to the junction of rue des Grands Augustin and the rue Saint-André des Arts. Turn right and continue. Cross the rue de L’ancienne Comedie into rue de Buci. 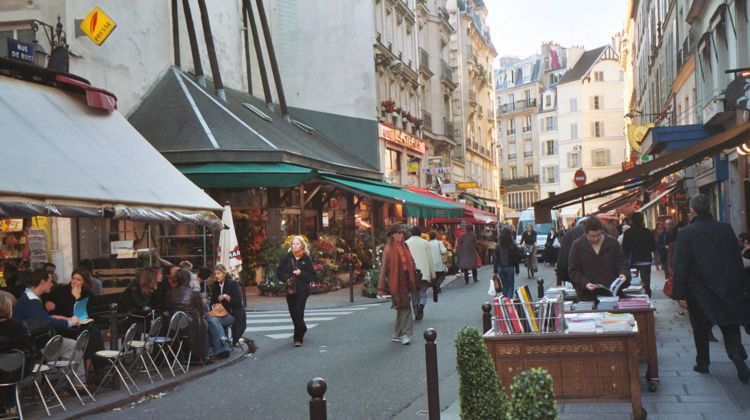 Rue de Buci is a very popular street with tourists who sit for coffee at a number of cafés. It’s busy most of the day.
Continue on until you come to rue de Seine where you’ll turn right.

Along this street you’ll find many of Paris’ private art galleries. Enjoy the stroll, window shopping. Don’t hesitate to go inside and look around whichever gallery takes your fancy. 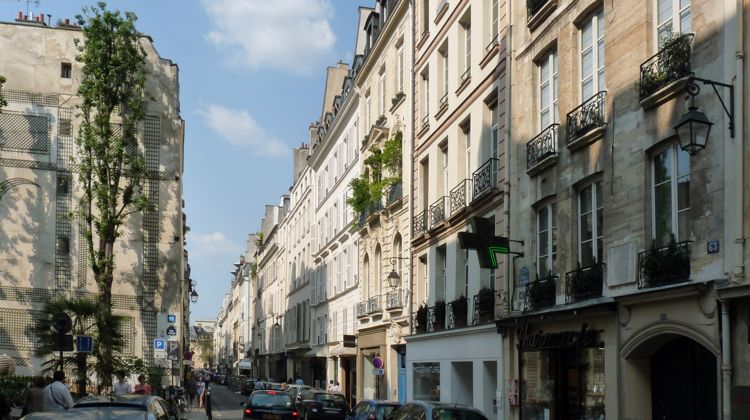 Visit this street on Thursday evenings. It’s when the exhibition openings are held. It’s always a pleasure to go inside for a glass of wine with cheese. Mingle with the Parisian art scene, too.

I like to continue on along rue de Seine until coming to rue Jacques Callot. This is a lovely little street with two nice spots for refreshments or lite meals. 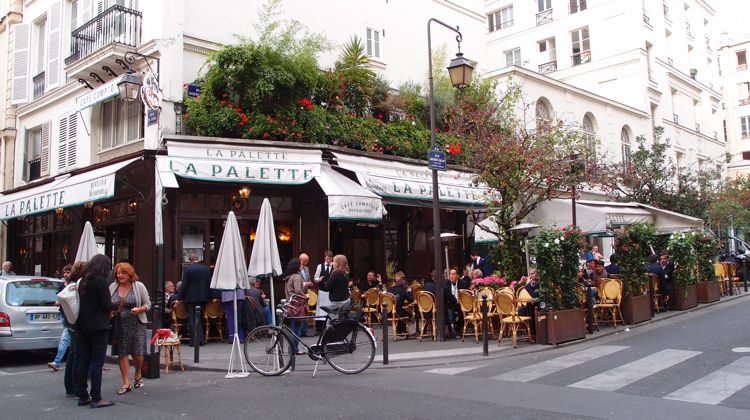 Continue on until you reach rue de Furstenberg. 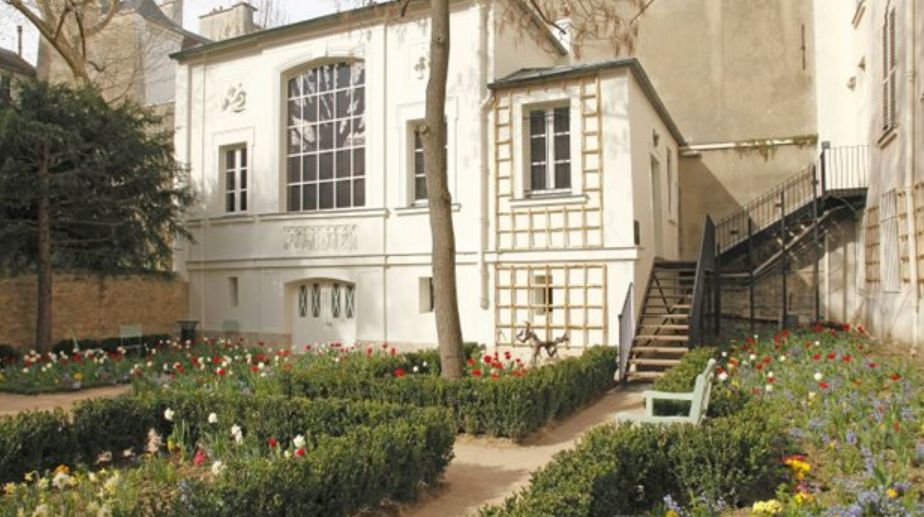 This address is now an art museum dedicated to painter Eugène Delacroix. It was the painters’ last residence. Délacroix’s art studio and the gardens are a delight to see. 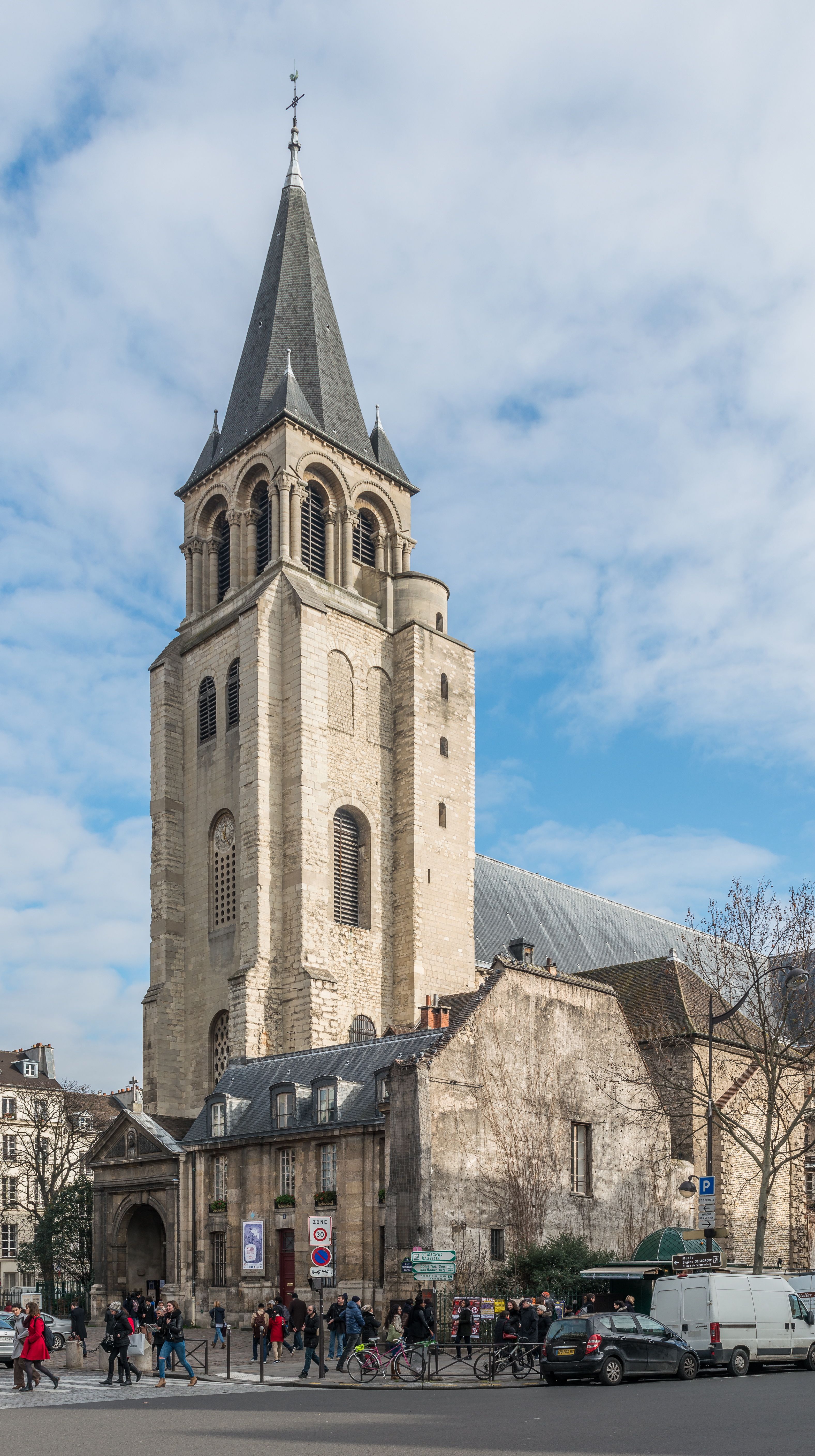 Depending on how much time you’ve spent along the way, you can opt for an aperitif or bite to eat at the iconic Les Deux Magots. 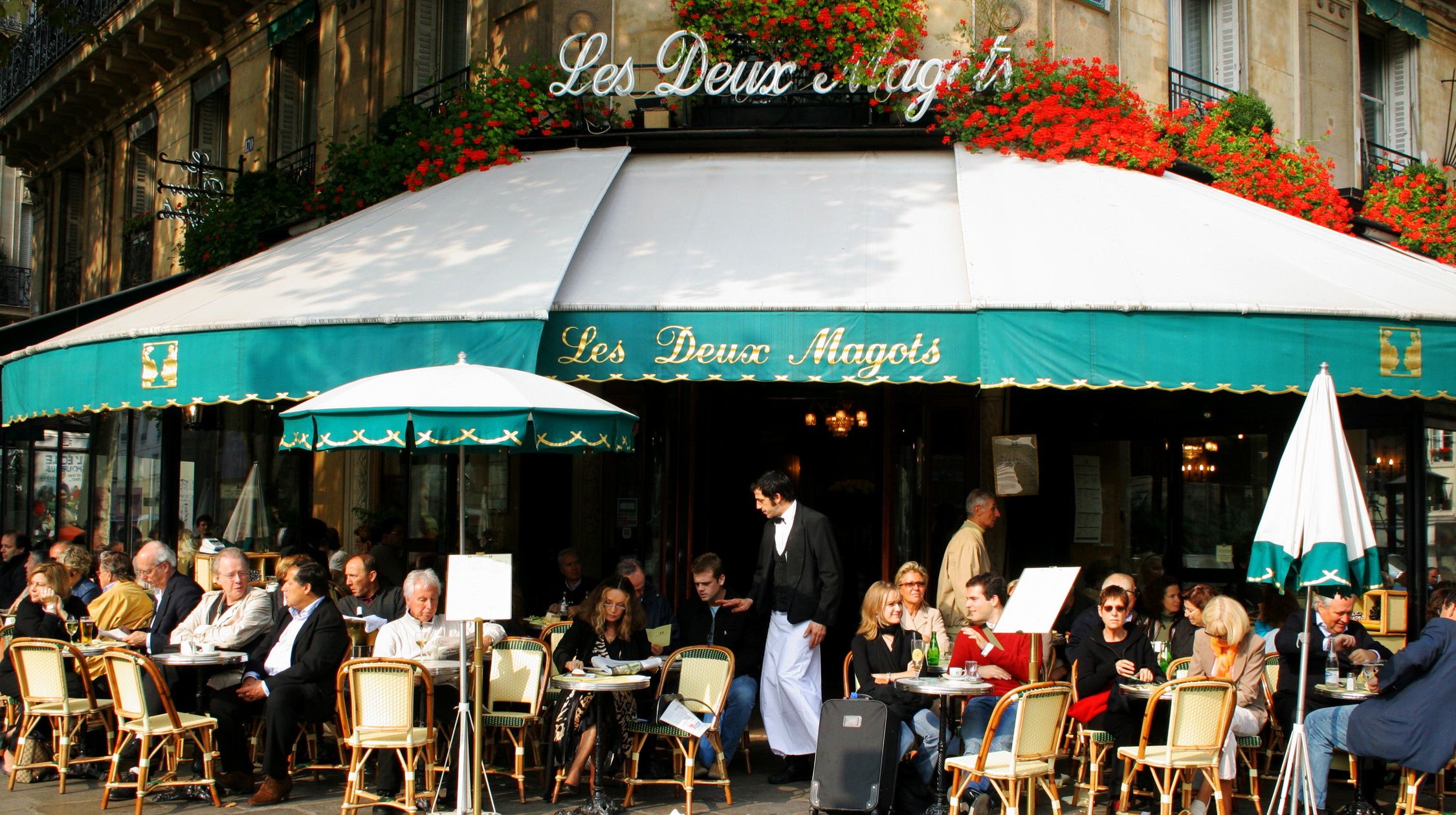 Alternatively, you could head over to the equally famous Café de Flore.

There are plenty of options for lunch in this area. 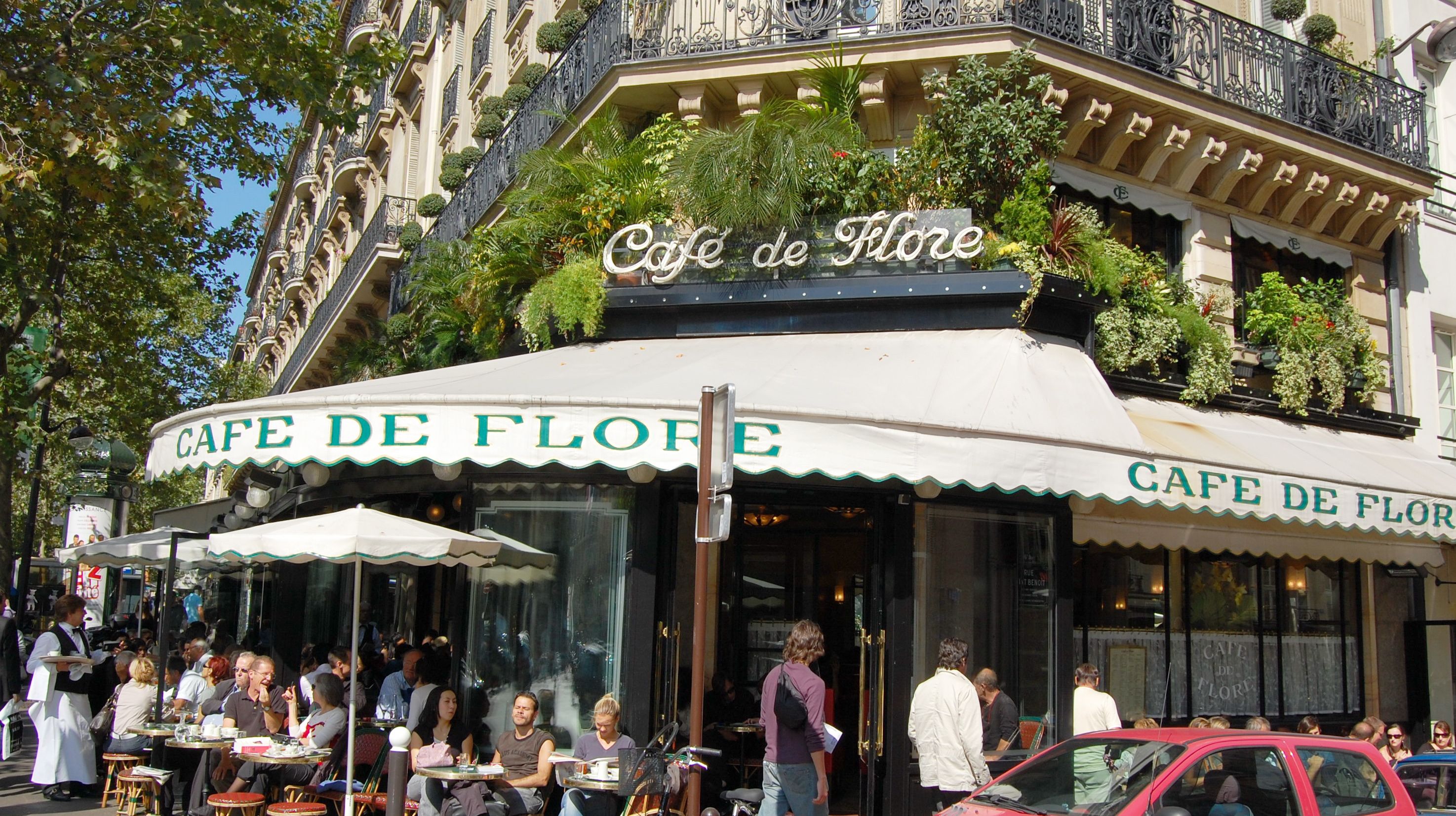 One of the best options in the area, though, is just a little further along. If you can get in, L’Avant Comptoir is a must experience for French cuisine fans.

Time for rest in the Jardins du Luxembourg

After you meal, it’s really time to take a rest. Just a few minutes away, you’ll find the perfect resting spot in the Jardins du Luxembourg.

Walk on to rue Corneille. When you reach the junction of Rue Corneille, rue de Vaugirard and rue de Médicis you’ll see the gardens right in front of you. 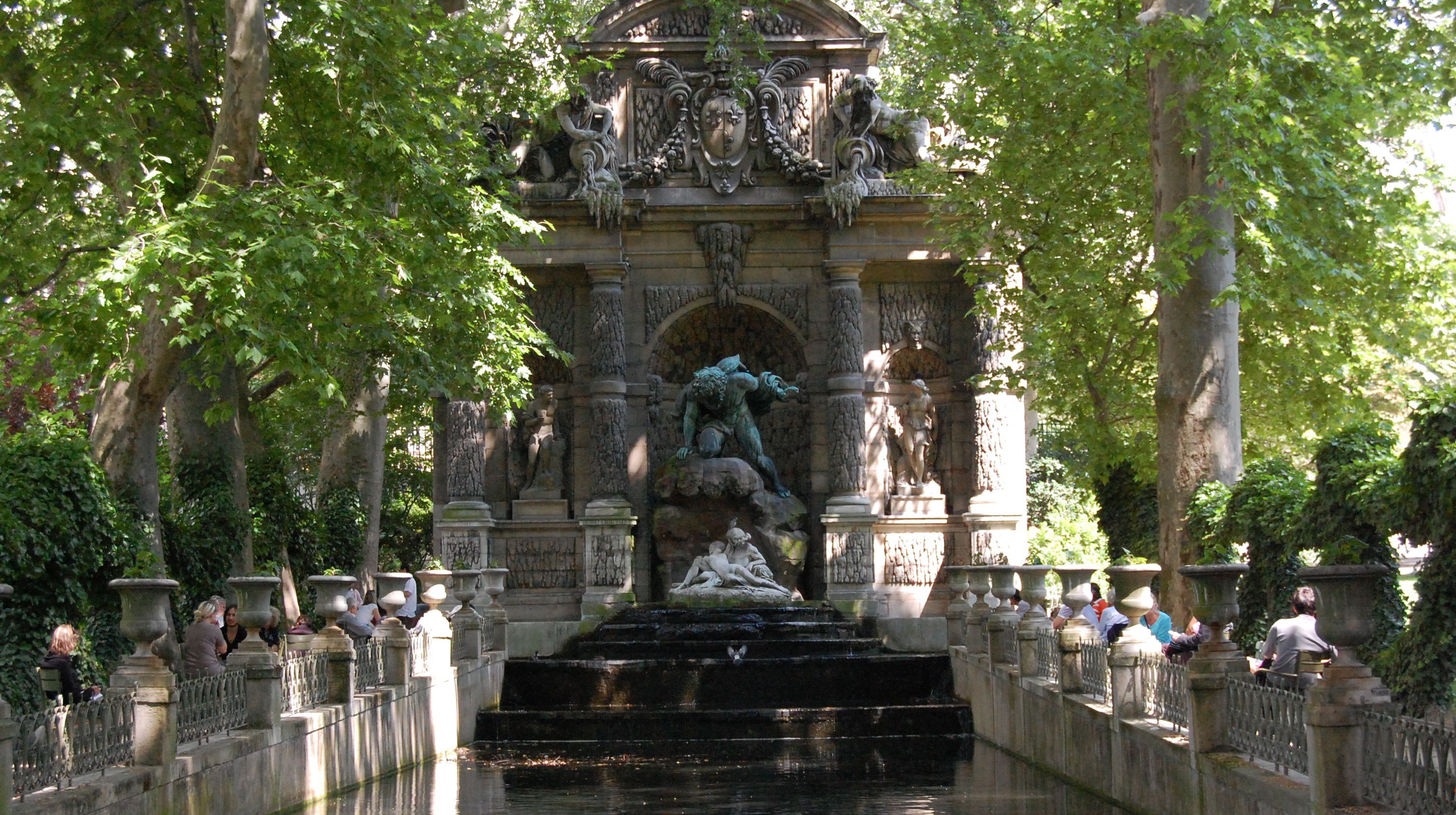 Cross the rue de Vaugirard and enter the gardens by the side of the French Senate, the former Luxembourg Palace. This stunning building was modeled after Palazzo Pitti in Florence at the request of Marie de Médicis. 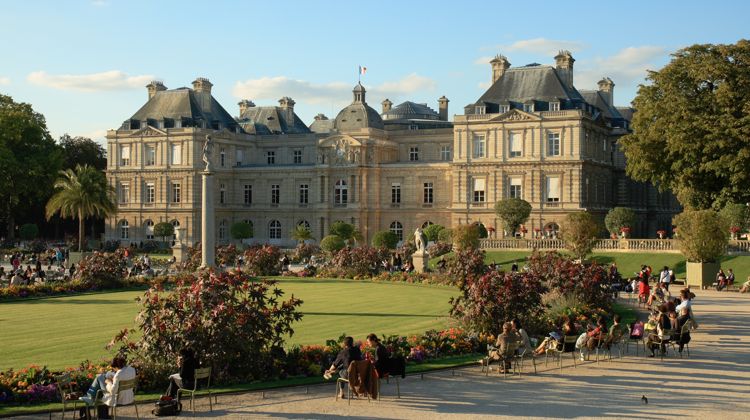 Head to the main fountain for stunning views of the garden’s landscaping.

Enjoy a well-earned rest after this Paris walk.

It also builds up your appetite.

And what better way to satiate a good appetite than the perfect French meal!

Ditch the diet in Paris. After all, you can walk off those delightful calories savored indulging in the finest French cuisine.

Check out our Jogging Tour of Paris for a unique way to discover the sites and connect with the local Parisian way.