Let me put it this way. What a difference an aimless stroll can make. Abandon everything for a walking tour of Paris, without guide or map of any kind.

Set aside a day in Paris to discover by chance the enchantment of the City of Light. See more than the famous streets of Paris. Go deeper. Discover the backstreets, hidden passages and arcades, secret corners and living spaces of local Parisians.

Beyond The Famous Streets of Paris

There’s so much more to Paris than the main tourist attractions. 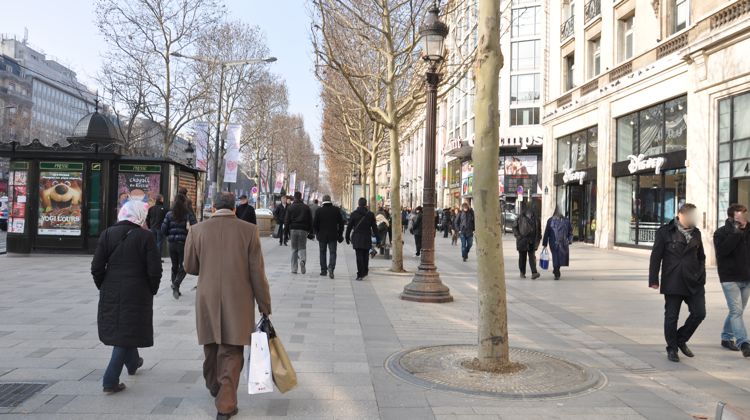 Take a Paris walk, pleasurably unplanned. After all, it’s ever-so Parisian to do so. Let me explain why with this quote from Edmund White.

Paris lives in the details – the kind of things you only discover through the random wandering this city invented – that aimless Parisian compromise between laziness and activity known as flânerie.

Yes, we have a word for the way we take our Paris walks. It’s important. Grasping it’s meaning helps forge a better understanding of what’s unique about Parisian lifestyles and attitudes.

How To Take Your Paris Walks, The Local Way

Sounds clear enough. But for the Parisian, it’s not that simple. We’re ever-so taken by our literary and cultural history. We love to complicate things, too. So let’s look at a literary history to get a better understanding of what it is to be a flâneur.

Charles Baudelaire (1821-1867) was a French poet. He’s very famous and much loved in France. He was also a notable essayist, art critic and translator. Baudelaire is recognized as having developed the modern meaning of the word “flâneur”. It is a “person who walks the city in order to experience it.”

That sounds good, doesn’t it! So much more than seeing attractions, it’s about experiencing the city, the local way. 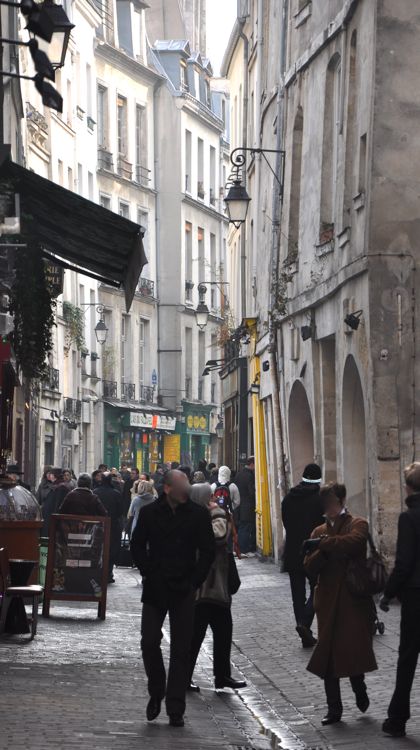 Put your eyes, ears and mind close to the beating heart of what makes this city tick. Understand what really makes it unique by assuming the “flâneur” attitude for your next walk in Paris.

In English, there isn’t really an equivalent word covering the full French meaning of “flâneur”. Most definitions miss the nuances and attitude.

… the deliberately aimless pedestrian, unencumbered by any obligation or sense of urgency, who, being French and therefore frugal, wastes nothing, including his time which he spends with the leisurely discrimination of a gourmet, savoring the multiple flavors of his city.

I particularly like Cornelia reference to a “leisurely discrimination of a gourmet savoring the multiple flavors of his city”. Now there’s an idea.

A Paris walk is like devouring an amazing gourmet meal with good local company.

Opening up the secrets of Paris on foot is like savoring a fabulous vintage French wine. It expands your sensory perception. It lets you travel through time and connect with the local culture.

There is so much minute detail to absorb with each walk. Each journey is like an unforgettable gastronomic dish. Perhaps that’s why Hemingway called his famous book about Paris, “A Moveable Feast”!

Read The Streets Of Paris On Foot …

The streets hold secrets. They’re like a history book or cultural essay. Walking is the act of reading the labyrinth of the city-scape and it’s inhabitants. 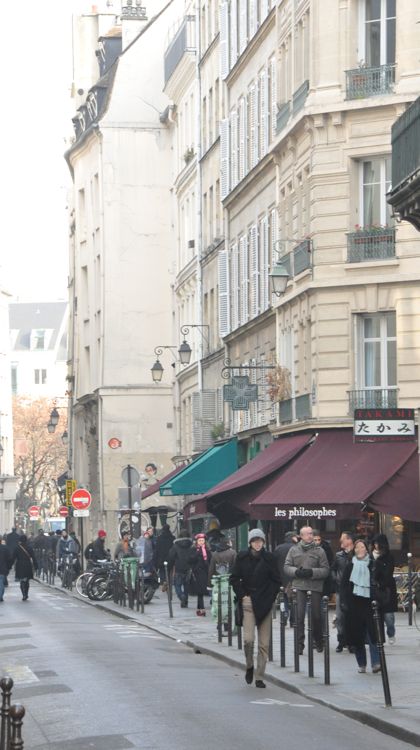 Committing yourself to a random Parisian walk is more than a stroll through the famous streets of Pairs. Sure, we love strolling the avenues and exploring the quays of Paris. The Champs Elysées, Grands Boulevards, the Quay des Augustine, d’Orsay and Invalides are all “must do things in Paris”. But we also love ambling into parts of the city virtually unknown to visitors and, indeed, even many locals.

I love being lured into fascinating and seductive backstreets when taking my Paris walks.

Here’s our suggestion. Set at least one day in Paris aside. Have no plan. Wake early. Put on some comfortable walking shoes. Then, simply go outside. Without thinking about direction, just walk.

Simple. Let yourself get happily lost. Allow the labyrinth of Paris streets swallow your attention. They’ll reward you with adventure. 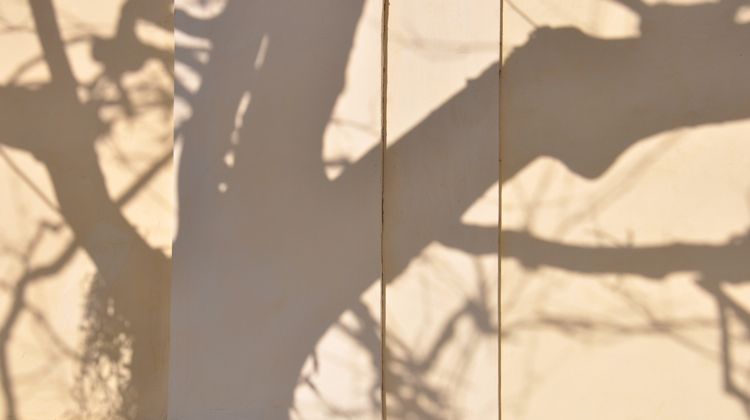 Take a notebook and camera with you. Walter Benjamin spoke of the flâneur taking in the city in its images, creating a durable residue for a poem or painting.

That anamnestic intoxication in which the flâneur goes about the city not only feeds on the sensory data taking shape before his eyes but often processes itself of abstract knowledge – indeed, of the dead facts – as something experienced and lived through. this felt knowledge travels from one person to another, especially by word of mouth…
(Walter Benjamin, The Arcade Project)

And don’t worry, you won’t really get “lost”. Paris is a very manageable city on foot. It’s slightly smaller than the Bronx. It’s much smaller than London, Berlin, Madrid or Rome. You can walk from one end to the other in a matter of hours or less.

Paris has plenty of orientation points, too. The city is split in two by the River Seine (the Left and Right Banks). There’s also the Eiffel Tower and Sacré-Coeur to to help with navigation. 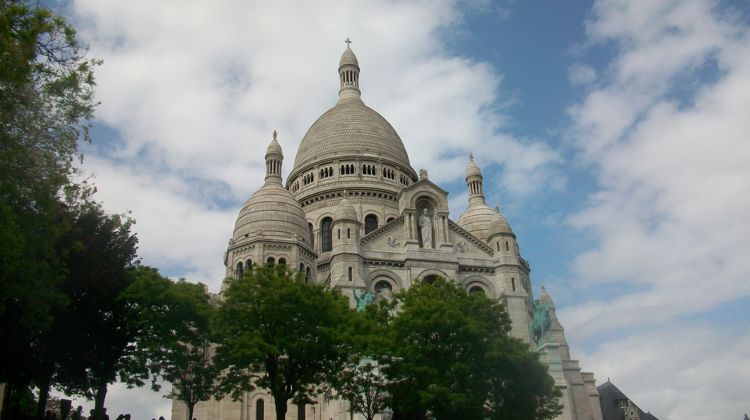 If you do get disoriented or tired, you’ll never be far from a Metro stop, bus stop or taxi. They’ll take you home in a flash.

Be adventurous. You can walk anywhere in Paris’ inner-center. Stroll the narrow streets of Saint-Germain-des-Près. Discover the hidden gems of Montparnasse. Stroll the Canal Saint-Martin and it’s backstreets. 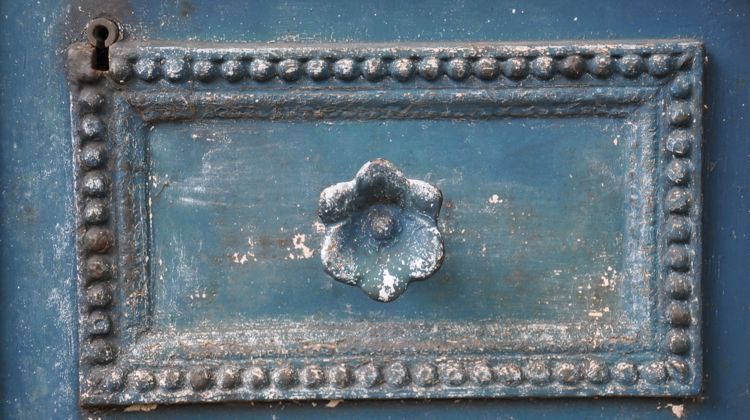 Unlike many major global cities, there really aren’t any neighborhoods in the inner city circle that you need to worry about, at all. Paris is a very safe city for an aimless stroll.

Join the long history of writers, philosophers and existentialists, by taking a free stroll around the city. Experience the diversity and freedom of big-city life in Paris.

Tasting Notes For Your Next Paris Walk

Now, in the true spirit of the flâneur – and the Parisian way – I’m not going to give you an itinerary. I will, however, entice you with a few examples of what to expect.

Keep your eyes on the walls. See the informative plaques that share traces of history. 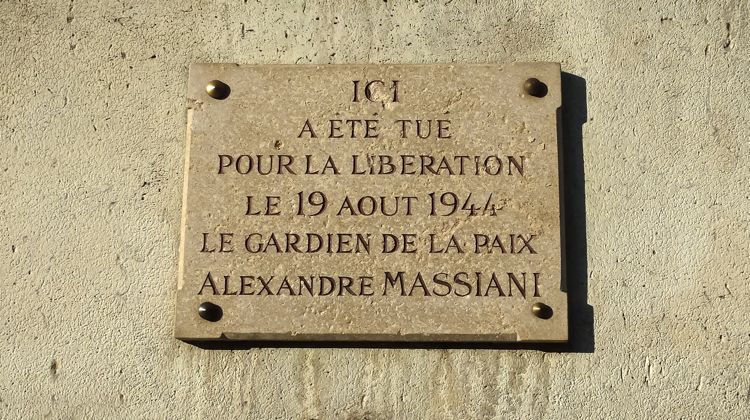 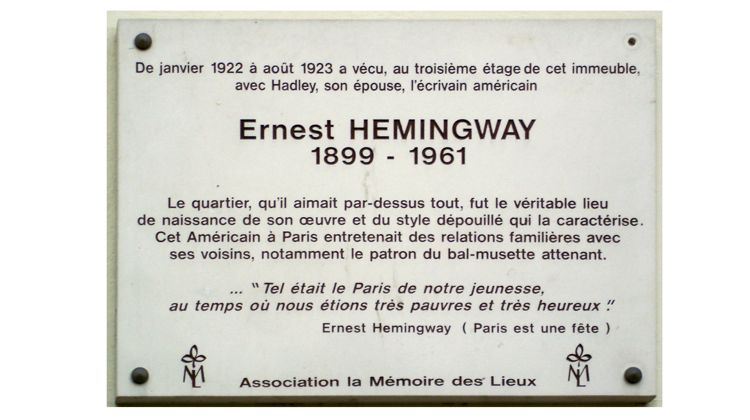 Also watch out for the street names. These are like a great encyclopedia of world history, too.

Take plenty of rest stops, too.

Sit yourself down on the terrace of a local bar. Don’t discriminate. Try different styles, from classy bistros to the less stylish “workingman’s” bar. They’re all fascinating. 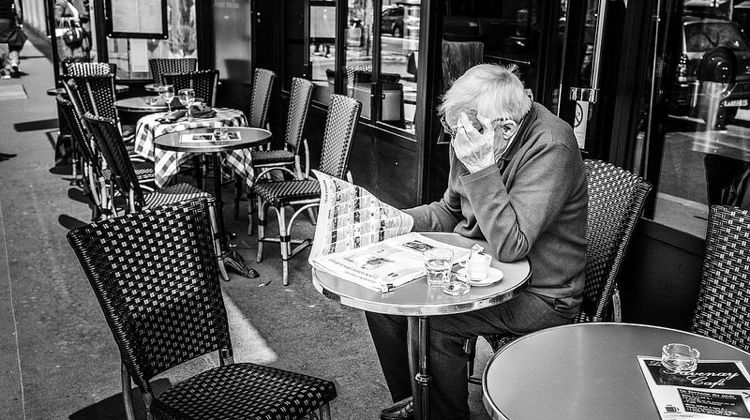 Soak up local conversations and attitudes, the rich diversity of Paris life. Do the Hemingway thing. Jot down notes in your diary, just like Hemingway or Henry Miller did. It’s OK, we all do it.

Back on the streets, don’t forget to keep a keen eye open for street art. Everywhere you go, you’ll catch glimpses of wonderful creations. Many artworks incorporate the built landscape as part of their inspiration. 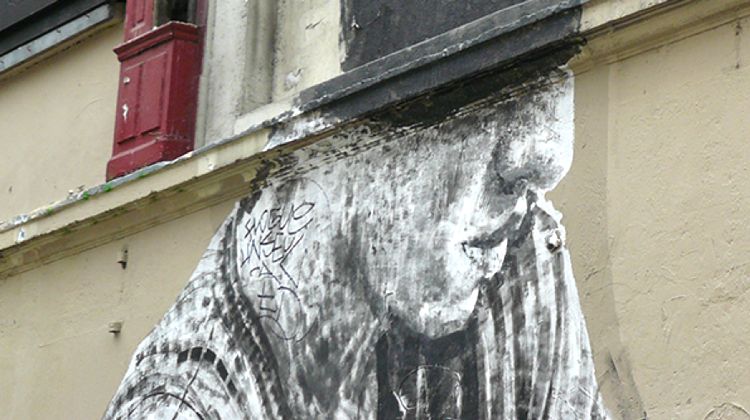 I like to keep an eye on lamp posts and traffic light poles. Often you’ll find tiny and humorous artworks added there.

Talking of facades, take note of the different types of facades on your Paris walk. Facade spotting is like reading a history book. Here are just a few examples you’ll come across on your random Paris walk.

The facades at 11 and 13 rue François Miron in the 4th arrondissement are unique expressions of medieval architecture in Paris. They date back to the 14th century. 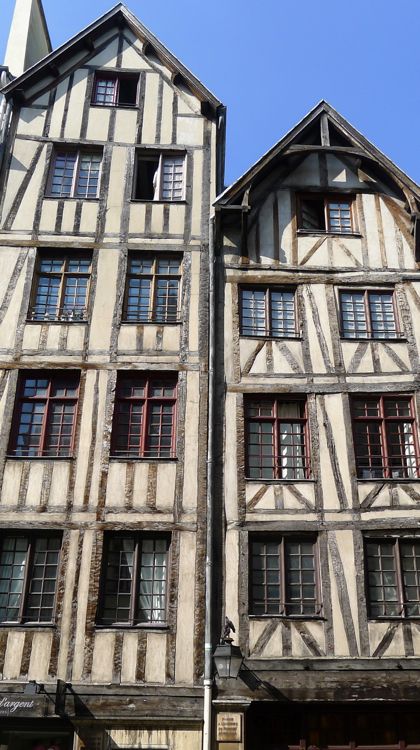 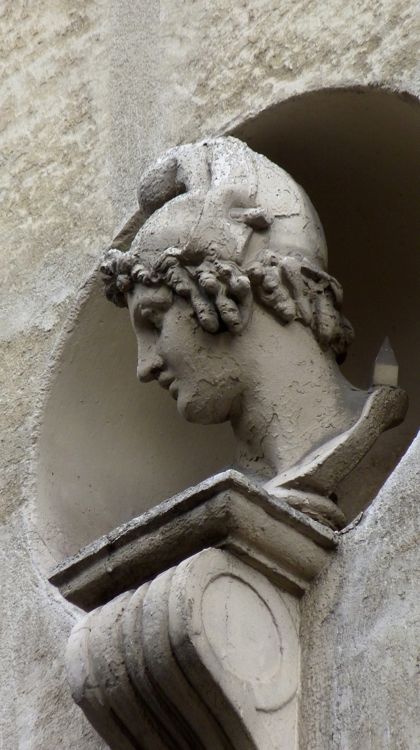 If you’re staying around Grands Boulevard (one of my favorite areas), keep an eye out for the archway entrances of the many arcades and “forgotten” alleyways that honeycomb this area. 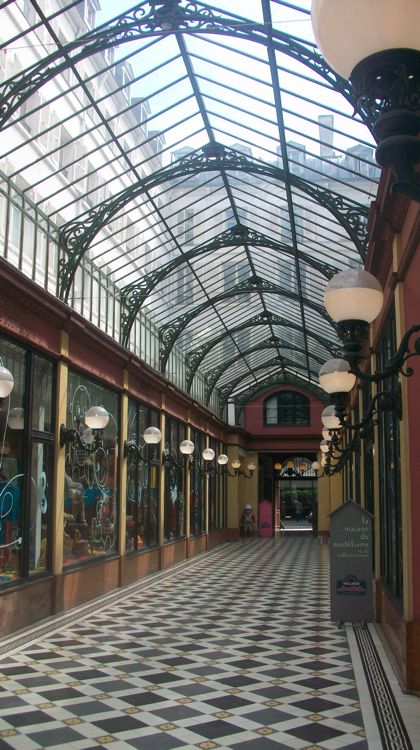 Around Grands Boulevard and the 2nd arrondissement you’ll discover several open passageways leading you astray. Some lead you to some of Paris’ most delightful shopping arcades.

These iron-columned, glass-covered structures shot up around the city in the 1820s and 1830s. They were, for the time, visionary pieces of industrial-age technology; symbols of a new age of modernity. 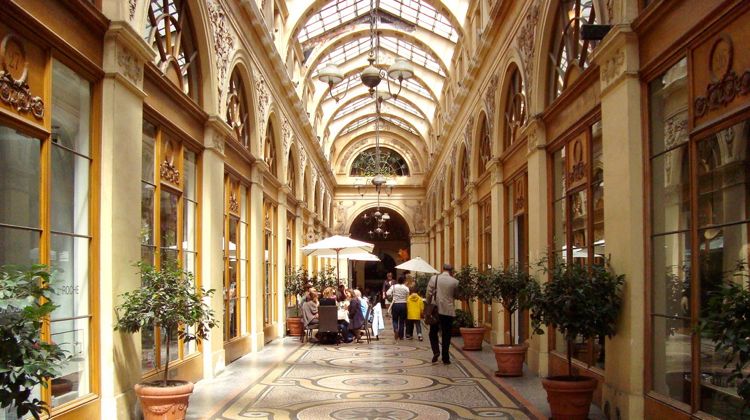 Look out for some of the best ones, like the Passages des Panoramas, the Passage Jouffroy, the Passage Choiseul, the Galerie Véro-Dodat, and the exquisitely restored Galerie Vivienne.

Open your eyes and heart to the symphony of the city. Let your instinct and curiosity be your guide.

Pop into cafés and take a chance in conversation. Try your luck. You’ll be surprised and enchanted.

Share your photos. We’d love to hear and see what you discovered.

Here’s to your adventurer’s spirit on your next Paris walk.