In fact, it’s a great time to be in Paris if you’re a craft beer fan. There are now more than 15 craft beer bars in Paris. Best of all, they’re serving local brews from 18 independent breweries in Paris.

If you’re in Paris between 5 May and 14 May, 2017, you can discover this French beer universe up-close. Come to the 4th edition of Paris Beer Week.

France is, of course, famous for its wines. Its long history of brewing is less well known.

The country’s northeast, falls in the famed “hop belt”. It’s an a rich agricultural area for hop growing. The hop belt runs from southern England through France into Germany. It ends in the Czech Republic.

Brittany, Alsace, and Nord-pas de Calais in France have long brewing traditions. They’re areas where hops have grown well and grapes less so.

The famous French brasserie is, in fact, a brewery-beer hall. The word “brasserie” means brewery.

In the early twentieth-century, brasseries were popular places to eat, drink and dance. Back then, there were over 500 breweries in France.

In the second half of the twentieth-century, the brasserie tradition waned. By the 1970s, the number of breweries in France dropped below 100. Brasseries became quieter places to eat and drink.

Today, most standard bars, bistros and brasseries have a poor selection of beers. Macro beers dominate, like the French Kronenbourg and the Belgian Leffe.

But things are changing. In Paris, in particular, there’s a veritable revival of the beer-making tradition. And in fact, it’s somewhat of a “revolution”. New breweries in Paris are fusing tradition with innovation, too.

Independent breweries in Paris are creating small batches using local ingredients and methods. Their microbrewery beers are gathering popular following among the locals. And with them, new craft beer bars are popping.

The Paris craft beer scene is thriving. It’s a good expression of the new Paris of innovative cultures.

To help you experience it first-hand, here are 3 Paris craft beer bars to get you started.

In the Beaubourg District

Bar Demory is a reference on the craft beer scene in Paris.

No industrial beer Bar Demory. They only serve local and international craft beers. The feature craft beers are their own brews (Bières Demory Paris). 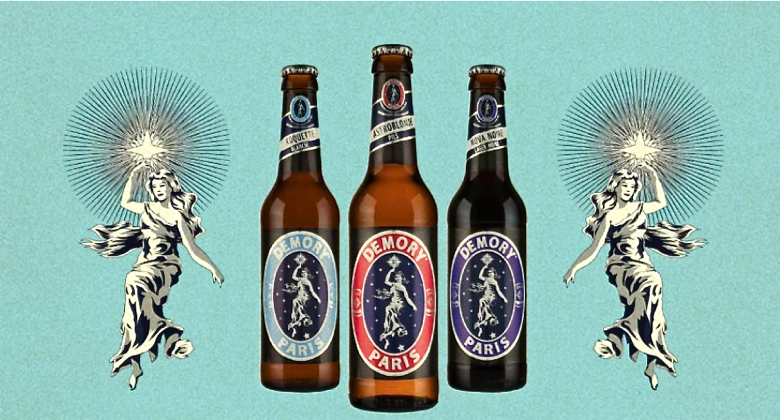 Bar Demory is the pub outlet for Demory Beers Paris. The brewery started operations in 2009. It’s first public offer was the Astroblonde in 2010.

Demory is one of the pioneers of Paris’ new wave craft beer movement. The crew took over the name of a now defunct famous French brewery of the same name (la Brasserie Demory).

At Bar Demory, there’s a good selection of local and international craft beers to try. Prices are reasonable at 3.50€ a half-pint and 6.50€ a pint. 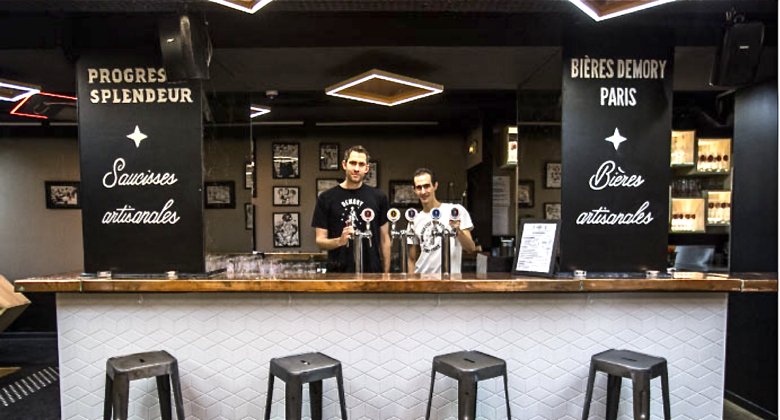 Bar Demory is great for its simplicity and the quality of its home brewing. The fun crowd is welcoming.

Cool things to do nearby Bar Demory

The bar is a stones throw away is Châtelet, Paris’ modern shopping mall and transport hub. It’s even closer to the Pompidou Center, the must see modern art museum. A little further is Le Marais.

Start your day with a cool Paris walk in Le Marais. Wander its narrow streets. Enjoy the architecture. Discover the chic boutiques and art galleries. Have a delicious meal in one of the many classic bistros or restaurants for good French cuisine. Then head to Bar Demory for some Parisian craft beer and local atmosphere.

Feel like a movie after a long day of sightseeing? There’s a good art-house cinema close to Bar Demory. The MK2 cinema (50 Rue Rambuteau, 75003 Paris) screens films in original versions with subtitles. Many films are in English.

And Friday and Saturday, 6 pm to 4 am

In the heart of “Silicon Sentier”

Hoppy Corner is the “new kid on the block”. Remy, formerly of Bieres Cultes, opened the craft beer bar in April 2016.

Hoppy Corner is in the middle of Paris’ Sentier District. It’s the tech-hub of France, often referred to as “Silicon” Sentier. Like so much that’s going on in this cool area of Paris, innovation is the flavor. 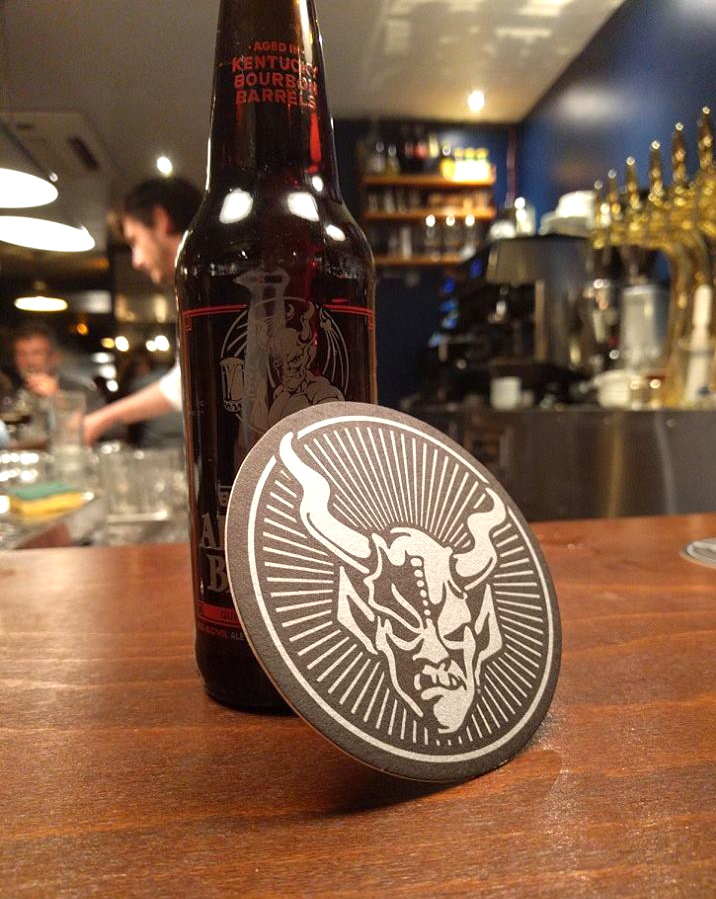 Hoppy Corner looks like a venue in a state of evolution with a tone of rock ‘n roll. Like a startup, it’s in a fluid state of perfection.

The local crowd comes late afternoon for the quality craft beer and cool vibe. There is also a delicious selection of tapas. Conversation is easy with the afterwork crowd. The night heats up. It’s a good spot to socialize. 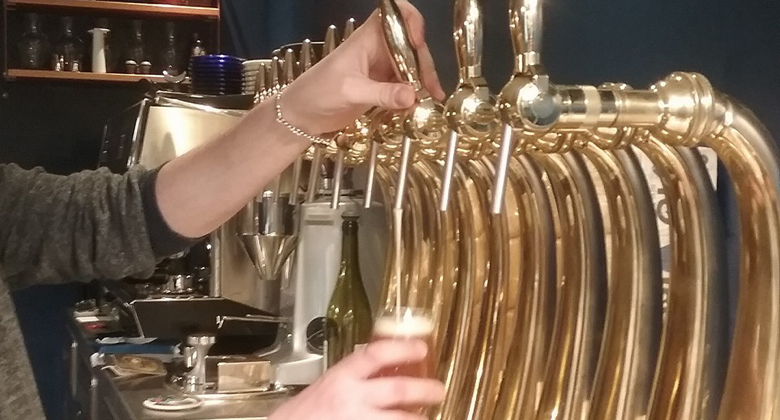 The choice is large. Reputable classics and more original options are on offer. The selection moves with the seasons and what’s best.

Cool things to do nearby Hoppy Corner

A few meters from Hoppy Corner is the “foodie” famous rue du Nil.

And take a random walk around the neighborhood. It’s an interesting area. The Sentier district was once the mecca for France’s “rag trade”. You’ll see its traces.

Also watch-out for the local startup scene. The Sentier district is the “historic” center of France’s innovative economy. You’ll run across many startup hubs, incubators and co-working spaces. Drop in and say hi. Find out what’s going on. Learn about how Paris is being transformed.

And with the startup scene, many new concept stores and innovative eateries popped up. A few meters from Hoppy Corner, taste home-made bacon-topped doughnuts at Boneshaker (77 Rue d’Aboukir, 75002 Paris)!

Monday to Thursday, 5 pm to Midnight

Also open Friday and Saturday, 5 pm to 2 am

In the Canal Saint Martin district

Le Triangle (The Triangle) is both restaurant and microbrewery.

It offers simple but refined homemade food made with fresh and in season produce. 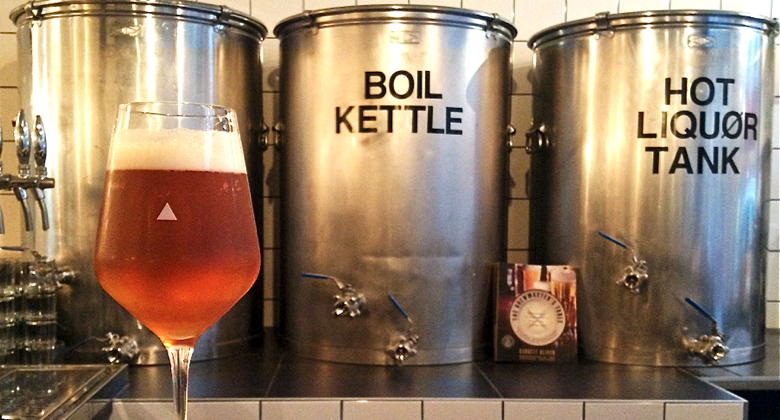 At Le Triangle, the menu shifts and changes with the seasons. No two visits will be the same as the offering adapts to what’s fresh and best at the time.

The vibe is local and without pretension. Dining and tasting craft beers at Le Triangle is a convivial affair. Food comes on large platters for sharing.

On tap, Le Triangle serves 8 craft beers made in-house. There’s also a good choice of European and North-American craft beers. The selection changes with the seasons and with what’s best. There’s something satisfying for most beer palettes.

The brewery’s own creations are ever changing. The brewers and bar staff take the time to explain the brewing process. Their passion for the craft is clear.

Le Triangle organizes special events around beer and food pairings, too. Coming up on the 7 May 2017, for example, they’re offering a menu of 7 dishes with 7 craft beer tastings.

On the first Saturday of the month, they offer a rotating selection of 8 craft beers. You get to taste craft beers brewed either on-site, or from local breweries in Paris,or abroad.

Cool things to do nearby Le Triangle

Le Triangle is a few streets back from Canal Saint Matin, a wonderful and trending area of Paris to explore. There’s no shortage of things to do in the area.

Along the way, drop in and visit Point Ephemère (200 Quai de Valmy, 75010 Paris). It’s a former squat for local artists in a warehouse once used for art deco construction. Today, it’s an epicenter for the local arts scene.

Point Ephemère has a large outdoor space. Local Parisians come for the exhibitions, concerts and evenings of independent music. It’s a popular venue to hear the latest on the Parisian pop, rock, electro and hip hop scene.

Are you a French film buff? If so, visit the iron footbridge at the locks of the Récollets. The footbridge featured in Amélié. The 2001 cult French film by Jean-Pierre Jeunet starred Audrey Tautou.

Where to find Le Triangle

There you go, 3 cool craft beer bars in Paris to discover.

And as you do, always remember, the abuse of alcohol is dangerous for your health. Consume with moderation.