“What?”, I can hear you scream. “Thanksgiving without Turkey!” “Where is our sense of history and tradition?” Not to mention, Thanksgiving in Paris, far from home and family!

Well, not so fast there. Hear me out on this one …

Here’s the thing. It can be tough for an American in Paris on Thanksgiving. The traditional Thanksgiving meal can be hard to find in a city renowned for gastronomy. And on top of that, you’ll be far from home and, most likely, family.

How to experience Thanksgiving dinner in Paris

It’s true. There are ways to fix the Thanksgiving dinner challenge, with a little effort.

Every year, the Internet fills up with articles listing American style restaurants in Paris.  They list the best restaurants serving Thanksgiving menus. You’ll find lists of American grocers where you can get the essential ingredients.

Google it. You’ll get plenty of great tips.

Thousands of American expats living in Paris will sit down to fabulous Thanksgiving dinners. Their homes will fill with visiting moms and dads, grandparents and local Parisian friends. On the menu will be the familiar roasted turkey, pumpkin pie and mashed potato. And yes, there will be marshmallows.

And there will also be thousands of American travelers visiting the city. They’ll have booked ahead at one of the many American style restaurants in the City of Light, Paris. Traditional Thanksgiving menus will be had and the holiday season will kick off in style. Paris will not let you down.

Here’s a shortlist of where they’ll go …

Where to eat Thanksgiving dinner in Paris

Treize
(16, rue des Saints Pères, 75007)
On the Thanksgiving menu all week will be roulade of turkey and stuffing with gravy, broccoli gratin or sweet potatoes. There’ll also be buttermilk biscuits.

Joe Allen
(30 rue Pierre Lescot, 75001)
The place credited with bringing the American burger to Paris (now a veritable craze), is offering it’s own Thanksgiving menu. Treats will include Pumpkin and squash chowder with pumpkin seed croutons and, of course, Roast Thanksgiving turkey with quince, apple and walnut stuffing and gravy. Throw in some candied yams and sautéed green beans, plus Cranberry sauce with orange and spices, and you’ve got Thanksgiving heaven.

Verjus
(52 rue de Richelieu, 75001)
Their Thanksgiving-themed preset tasting menu and wine pairing is offered on 3 dates this November, 2016: the 25th, 26th and 27th. In fact, they’re right into the holiday season, so you can book ahead for New Years Even special celebrations.

And if meat isn’t your thing, there’s always …

The Gentle Gourmet
(24 boulevard de la bastille, 75012)
This 100% Vegan restaurant in the heart of Paris is offering a fully vegan Thanksgiving meal.

Where to shop for American style groceries in Paris

Find all the ingredients you’d need at anyone of these American grocery outlets (available all year round).

Now all of this sounds great … and it is.

But, you’ll have a hard time getting a reservation in one of those restaurants.

And who wants to spend their vacation in the kitchen? You’re in Paris, after all. This is the city of luxury and self-indulgence. Spend it relaxing.

Let someone else do the cooking!

Besides, there’s another way of looking at the challenge. When in Paris, you can leave the turkey out and have the meal of a lifetime.

You can sidestep the “traditional” Thanksgiving dinner and still have a 100% authentic Thanksgiving. If anything, it will be a unique and inspiring experience.

Experience your own “First Thanksgiving” in Paris

Experience your own “First Thanksgiving” in Paris 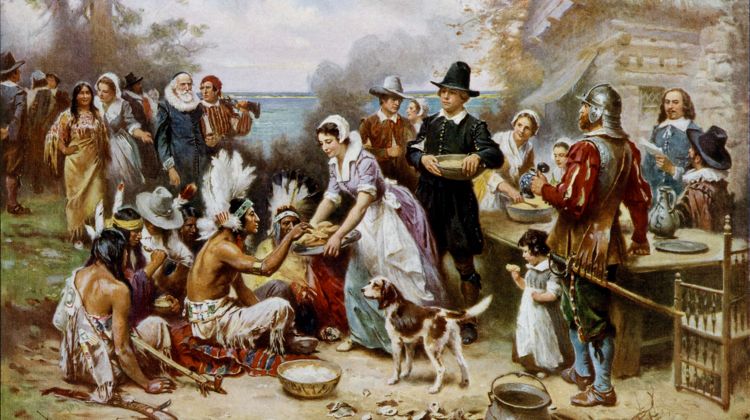 Way back in 1621, the Pilgrims held their amazing “First Thanksgiving”. No, it wasn’t in Paris. It was at Plymouth Colony. But it did involve a a merry bunch of “Europeans”, so to speak.

You see, the Pilgrims were laden with their European heritage. They were also enriched by a new and abundant land. On their first harvest, they decided to celebrate. Their inspiration was the centuries old tradition of European harvest festivals.

Now that First Thanksgiving harvest celebration was quite unique. The pilgrims didn’t feast alone. They invited the locals, the native American Wampanoag people to join them.

And what was on the menu?

Well, to start with, there was no turkey!

The First Thanksgiving was a merry feast. It contained waterfowl, venison, fish, lobster, clams, berries, fruit, pumpkin and squash. In short, everything harvested fresh. The menu was 100% in season, sourced local.

And by the way, for those of you who love to “party on”, that First Thanksgiving wasn’t only 1 day. It lasted 3 days.

When in Paris this holiday season, have a 100% authentic experience. Dine on what’s local, in season, and harvested fresh. Do so and you’ll honor that first Thanksgiving, the Pilgrims and the Wampanoag people.

And make it a lasting affair. You’re on vacation in Paris, after all.

Harvest the best gastronomic experience this holiday season in Paris

So here’s what you can put on your Paris Thanksgiving and holiday season menus. It’s going to be delicious.

Autumn in France is is the best time for true gourmands. Top restaurants and fresh food market fill their menus with delights like these…

Gastronomic delights from the sea …

Truffles noires (Black Truffles)
Try any dish which includes French Black Truffles. The Black “Périgord” truffle (Tuber melanosporum) is an absolute treat. It’s named after the Périgord region in France and grows with oak and hazelnut trees. They’re harvest in late Autumn and throughout the winter.

You can even spend the afternoon with Thomas Boullault, L’Arôme’s Michelin-starred chef. Find out here …

Coquilles-Saint Jacques (Scallops)
November is the perfect time to indulge in this delicacy. The best in France come from Quiberon off the southern coast of Brittany. In France, scallops come with the orange coral still attached. It preserves the rich flavor when served with the white part (noix). Together, they’re super delicious when sautéed in garlic-basil butter.

A scallop dish to look out for is the Coquilles-Saint Jacques gratinée (Gratinéed Scallops). It’s an old French dish of scallops poached in white wine, placed atop a purée of mushrooms in a scallop shell. It’s covered with a sauce made of the scallop poaching liquid. It’s then gratinéed under a broiler. It’s rich and delicious!

Huîtres (Oysters)
A meal of oysters is a real Parisian affair. During the summer months, they fatten up in the seas. Then, from September through April, they’re served to Parisian tables. They’re at their absolute best in late October through December. So the holiday season is the best time to feast on this little indulgence.

In Paris, oysters are almost never rinsed. This preserves their full flavor. And, at the best restaurants, they’re shucked right in front of you and served on ice. If you wish, you can squeeze a little lemon on top. But for the true gourmand, let them glide into your mouth fresh.

Here are a few addresses where you’ll find perfection with oysters in Paris.

Gastronomic treats from the hunt …

Autumn in France is hunting season. It’s when notices across the countryside proclaim “La Chasse” (the hunt).

Not enough? Pick braised venison (Civet de cerf). It’s the meat from the red, roe and fallow deer. The secret to cooking it is in the marinating. The longer the better.

And did I mention Foie Gras? Of course, that too. It comes into season in Autumn and is one of those signature French dishes one must try.

Looking for a classic French dish? Go all out with one of these Autumn treats.

Cassolette
Not for the delicate, the Cassolette is a deliciously rich, slow-cooked casserole from the south of France. Meat, pork skin and white beans are it’s foundations. The dish is cooked in a deep round earthenware pot. Eat too much of this rich delight and you might feel you’ve swallowed the pot as well!

Bœuf Bourguignon (Beef Burgundy)
Now few will not know of the world famous Boeuf Bourguignon … Beef Burgundy. And there’s no better place in the world to try it than in France. It’s stew prepared with beef braised in red wine. Naturally, that means Burgundy red. The beef broth is usually flavored with garlic, onions and a bouquet garni with pearl onions and mushrooms.

Pot-au-feu
The perfect French beef stew! According to the chef Raymond Blanc, pot-au-feu is “the quintessence of French family cuisine. It’s quite possibly the most celebrated dish in France, honoring the tables of the rich and poor alike. Although these days, it can be quite pricey with it’s rich array of ingredients: beef, carrots, turnips, leeks, celery, onions, and cartilaginous meat (oxtail, marrowbone).

Choucroute garnie
This is a famous Alsatian recipe. It’s prepared with sauerkraut, sausages and other salted meats and charcuterie. Often it’ll include potatoes.

Wine & spirits in keeping with the seasons

Now, of course, you’ll not have any trouble finding perfect French wine to accompany your holiday meal. Grapes in France are freshly harvested and collected in barrels in September. It’s when the entire nation seems to go mad for grapes.

And there’s one special wine that fits the bill for our Paris Thanksgiving celebrations. One week earlier, on the 3rd Thursday of November each year, France celebrates the arrival of Le Beaujolais Nouveau.

At one past midnight on the third Thursday of each November, from little villages and towns like Romanèche-Thorins, over a million cases of Beaujolais Nouveau begins the journey through sleeping France to Paris. From there it will be consumed by the locals and shipped across the globe.

Beaujolais Nouveau is hugely popular in France and it makes for the perfect harvest celebration in November. It’s quite pleasant. A red wine which is as close to a white wine as a red can get. It’s an easy to drink, fruity wine. Best tasted chilled, it’s perfect for the festive mood.

And when you’re done with your meal, there’s another treat in perfect keeping with the harvest traditions.

Autumn is the traditional period for distilling Cognac, Calvados and Armagnac in France!

Plenty to be thankful for this holiday season in Paris

So, there you have it. A list of 24 ways you can enjoy an authentic harvest celebration in Paris this holiday season, all without turkey.

“But stop”, you say. We’ve forgotten the most important ingredient in any Thanksgiving. Family!

Well, that’s true. If you’re in Paris and far from family, there’s nothing that can replace that special bond. But in keeping with that First Thanksgiving tradition, why not simply join with the native locals?

The easiest way to share a meal with good company in France is to head to a fine French restaurant where you’ll be surrounded by likeminded people, all indulging in culinary pleasure.

Our all time favorite pick is L’Arôme. You’ll get a perfect welcome from Thomas and Eric. And when it comes to harvesting in season dishes, that’s exactly what they excel at.

Eating in France is a serious affair. It’s a time for togetherness and sharing, as much as it is about indulging in the finest in-season ingredients, cooked to perfection.

One last Parisian touch for your holiday season …

Ok, we have forgotten one other important ingredient for the Thanksgiving experience. Football!

No, I’m not going to suggest you watch European football as a substitute. No need, because …

You see, Paris is full of surprises.

Wishing you all the very best Thanksgiving & holiday season …

Come and harvest some wonderful experiences in Paris this holiday season