Did you hear about the floods in Paris? Pretty spectacular! Paris nightlife on the river Seine washed away. Some of the best bars in Paris became waterworlds. Deck chairs, pot plants and cocktail umbrellas bobbed to the sound of gurgling water. They looked like aquatic theme parks gone wrong.

But not to worry. The waters have subsided. The sun is out and those delightful hotspots of Paris nightlife are back in full swing.

… and you really should check them out on your next trip to Paris.

Looking for one of the best bars in Paris for a relaxing drink or late night partying? Head to the river Seine. Spend time mixing with the locals for some Paris nightlife, par excellence.

Paris Nightlife on the River Seine

A few years ago, the river Seine was baron for nightlife enthusiasts. River cruises were about the only thing on offer.

It was silly, really, given the river Seine’s beauty. Back then, the Seine was lined with working wharfs, industrial buildings and dominating expressways.

But that’s all changed.

Recently, the nicest areas along the Left Bank of the river Seine have been reconverted. Replacing the expressway, we now have a wonderful waterfront pedestrian walkway. Paris nightlife is thriving there. Some of the best bars in Paris are now floating barges and wharf-side terraces with stunning riverside views.

Read on to discover our top 5 bars in Paris on the river Seine.

Today, “Les Berges” along the Left Bank of the river Seine, from Musée d’Orsay to Les Invalides, is a vibrant hub of Paris nightlife.

It’s perfect for relaxing with a cocktail, glass of wine or your favorite beer. You’ll meet plenty of local Parisians, too. They love it there.

The views are fabulous. Take in the Eiffel Tower, the Grand Palais, and the spectacular Alexandre III bridge with the river Seine flowing beneath your feet.

Three of our favorite bars here are Le Flow, Rosa Bonheur-sur-Seine, and Faust.

Le Flow is a trending nightlife hotspot in Paris. It’s main venue is a modernized peniche (river barge) moored just a stones throw from the spectacular Alexandre III bridge. It has great views of the Eiffel Tower and the Grand Palais. 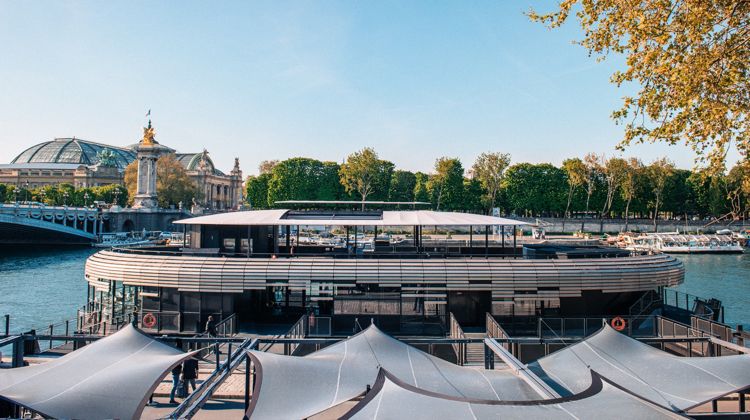 A multi-purpose venue, Le Flow has a bar onboard and a wharf-side terrace. There’s also a pop-rock concert hall that’s converted into a casual nightclub later in the evening.

Feeling hungry after a days sightseeing? Le Flow won’t let you down. It also features a gastronomic brasserie. The chef’s, Geoffrey Rembert and Gérard Cagna (Michelin-starred), serve up an excellent culinary offering.

And if you like to mix it up by trying out several venues during the evening, simply take a few steps to Le Flow’s neighbor.

This is one of my personal favorites. It’s the offshoot of the now famous Rosa Bonheur in the heart of Park Buttes-Charmont (Add it to your list of best bars in Paris to try out next time your in Paris).

Like Le Flow, Rosa Bonheur-sur-Seine is a peniche moored hard by the Pont Alexandre III. It’s modern wood and glass design will please. 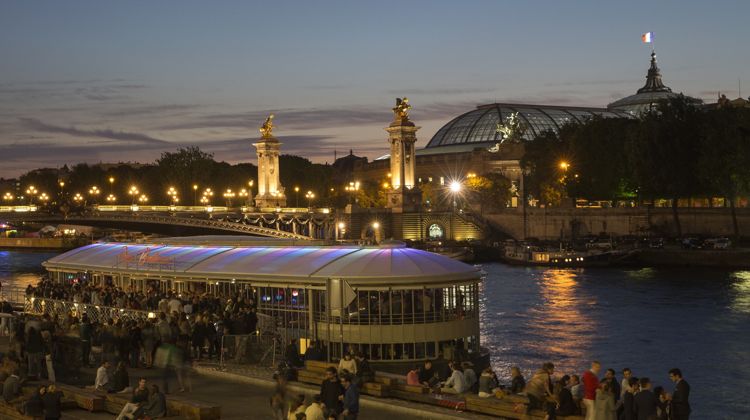 When there, look around 360 degrees. Feast your eyes on the surrounding scenery, including the French Foreign Ministry building’s impressive facade along the quai d’Orsay. Take in the sunset and watch the bateaux-mouche (tourist river boats) gliding by.

There is a bar onboard with both an interior and exterior deck. Inside converts into a casual nightclub later in the evening. There’s also a wharf-side terrace.

If you’re hungry, try the tapas, cheese and cured meat platters or wood-fired pizzas. They also do some interesting sandwiches, like the sea urchin taramasalata.

Of course, the bar gives a full service, offering great cocktails, a good wine list, and plenty of beers, both local and international.

Go early if you want to get onboard. Long lines now form quickly at this trendy address.

Again, if switching venues several times in the evening is your thing, just head over to another close neighbor, Faust.

Like it’s neighbors, Faust is right in the heart of the tourist route. It’s short walking distance from the the famed Champs Elysées, Arc de Triomphe, Trocadero and Palais de Tokyo. It’s the perfect retreat after a day of sightseeing. 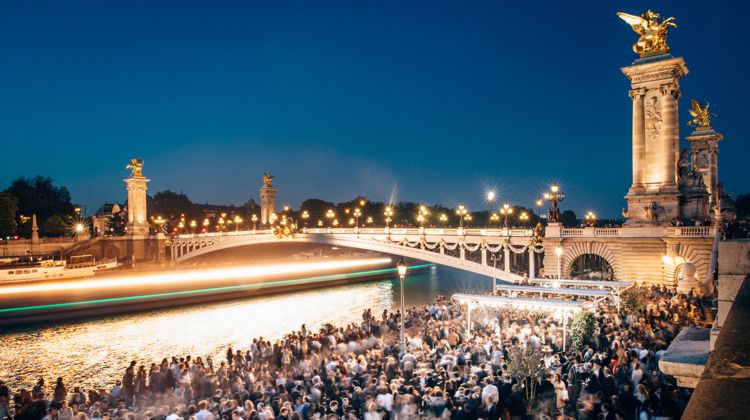 Before dining, enjoy an afternoon drink. Opt for cocktails, wine and your beer of choice. Later in the evening, you can head to Faust’s tunnel nightclub for some trendy house, techno or deep house music.

Unlike it’s neighbors, Faust is not exclusively for Paris nightlife. It serves early morning breakfast, too. It’s the ideal spot to catch the sunrise over the river Seine, sipping fresh hot coffee and tearing the light layered crusts off a perfect French croissant.

Drop in for Sunday brunch from midday till 4pm.

… and when you’ve finished brunch, it’ll be time to choose where to go for your second evening on the Paris nightlife scene.

Let’s try another area along the river Seine.

For the best bars in Paris near Gare d’Austerlitz

The Mayor’s push to redevelop Paris’ waterfront hasn’t only focused on traditional tourist areas. In an effort to spice up the city’s nightlife and cultural activity, they’ve also worked hard elsewhere.

One area of note is now part of Paris’ modern architectural hubs, from Gare d’Austerlitz through to Biblioteque Nationale (the National Library of France).

The best example of this urban resurrection is Les Docks.

How to get there via the Seine river, using Paris Batobus

Les Docks is an impressive and very modern development on the Left Bank of the river Seine. The architecture alone attests to the lively and unconventional mix of Parisian culture you’ll find there.

The main building consists of fluorescent green tubes on the facade. It’s confronting. The modern design is far from what we’d normally expect with Parisian architecture. But then, this is the city that built the Pompidou Center. 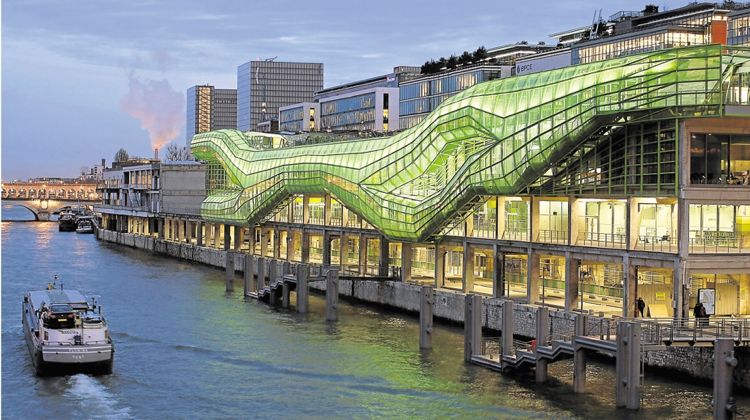 Les Docks is renowned as the center for fashion and design in Paris. The renowned fashion school, the Institut Français de la Mode (French Fashion Institute), has been at Les Docks since 2008.

There’s also a selection of boutiques and showrooms for young ambitious French designers. In fact, Les Docks has become a symbol of creative Paris. Like the river Seine itself, Parisian creatives see the city’s culture in perpetual movement.

Culture isn’t the only thing flowing at Les Docks, though. There are numerous numerous bars, clubs and restaurants. Enjoy a relaxing drink. Dine before going clubbing. Whatever your desire, Les Docks is your destination.

Want to hear the latest crop of young French musicians play? Then head to Les Docks. Cutting-edge programming and themed nights give you plenty to choose from.

Head to Les Docks after a day sightseeing in the area. Nearby you’ll enjoy the Institut du Monde Arabe, the Jardin des Plantes, Bercy Village (for shopping and cinema), and the National Library (BNF – Biblioteque Nationale François Mitterrand, including some very fine exhibitions, cultural and historical lectures and, of course, reading).

… and after all that, if you still have time, you can head over to Bateau el Alamein.

Now if you want to try something less “trendy” but eminently “cool” and welcoming, head to Bateau el Alamein. 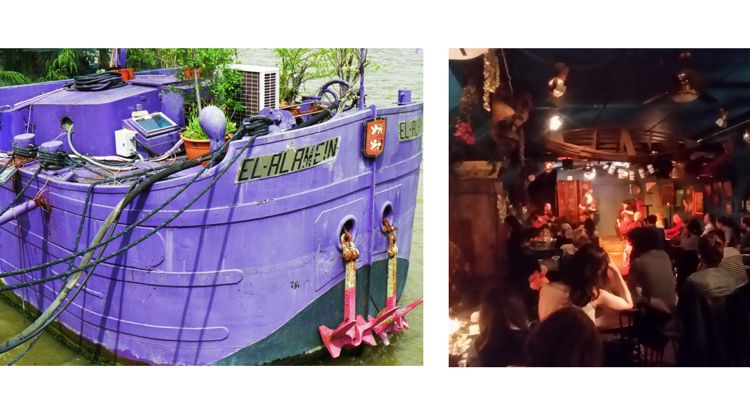 This venue is named after the great 1942 battle in Libya, during World War II.

“Why is that important?”, you ask. Well, firstly, the Battle of El Alamein is where Montgromery’s troops defeated Rommel’s African Corp. This brought freedom and liberty after Nazi rule. Plus, “El Alamein” means “double world”, from our lived to our dream worlds, which is a frontier.

So, somewhere in there, I guess, you have a statement about freedom, liberty and opening frontiers that reflects the spirit of this alternative venue. At Bateau el Alamein, you’re going to find free spirits and a lot of creativity. It’s great to catch another side to the local Parisian scene.

Since 1996, this peniche has been moored to the wharf at BNF, offering a welcoming gathering place. It’s where you come for concerts for all styles. Hear jazz, French folk song, pop, rock, punk, rap and more. You’ll hear some wonderful sounds from young French musical talents.

The physical surrounds, too, are wonderful. Enjoy your cocktail, glass of wine or beer surrounded by the flourishing gardens that adorn this floating botanic garden. You can even order tapas and desserts to make the evening.

Paris Nightlife: Let it flow with the river Seine

But it does give you an idea for your next trip to Paris.

Here are more ideas on how to have a Wonderful Time in Paris, meeting unique and inspiring locals.

Really, Paris has so much to offer.